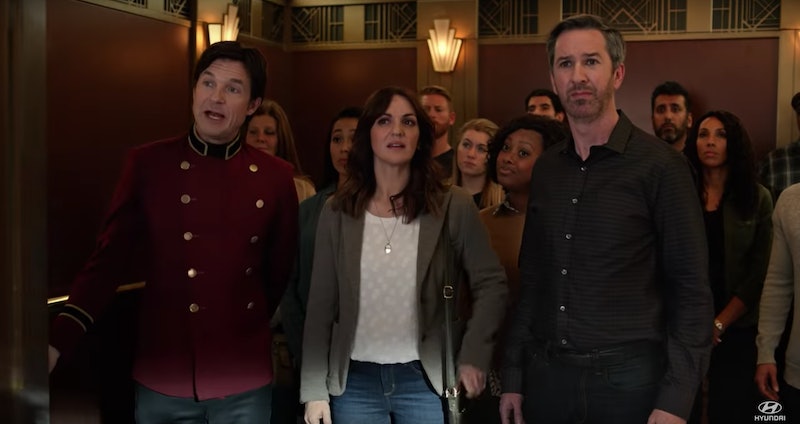 Riding in a packed elevator with strangers isn't exactly an ideal experience for anyone. But in Jason Bateman's Hyundai Super Bowl commercial, a typical awkward elevator ride gets even more dreadful — in a pretty hilarious way. Each floor the elevator stops at includes a less-than-pleasant scenario: going to jury duty, getting a root canal, being stuck in the middle seat on an airplane, having "the talk" with your parents, and more.

Despite probably not wanting to actually be in any of those scenarios themselves, viewers couldn't get enough of Bateman's delivery as the straightforward elevator man. Sure, it aired pretty early during the game on Sunday night, but some on Twitter even deemed it the best Super Bowl ad so far.

The whole takeaway from the ad is that car shopping typically falls way down in the category of situations you would not want to be in (hence all the supposedly less-bad situations depicted on the floors the elevator stops on), but Hyundai's Shopper Assurance is trying to change the game. And with the help of Bateman, the ad definitely caught the internet's eye.

For some, it didn't even matter what the ad was trying to sell. And I truly hope someone follows through with the pitch below of having the actor try to sell ice to a polar bear. Can you imagine?

Meanwhile, these people are declaring it "best commercial so far." Again, to be fair, it's still early, but Bateman's appeal is pretty timeless.

Others picked out specific segments of the ad that really spoke to them — including the vegan dinner party.

There were a few fans who just straight-up gushed over the whole thing.

And some people took the elevator commercial to a very deep place, Dante's Inferno style. Yes, really, and yes, it kind of works.

Honestly, all the floors in the commercial seem pretty miserable, but you can watch the ad and decide for yourself which you think is the absolute worst. Waiting at the DMV could probably be added to the list; same with helping a friend move a bunch of furniture into a four-story walk-up.

Basically, Bateman's ad already stole the show. And even if he doesn't do any future Super Bowl ads, Twitter had a few suggestions, as far as dream-casting the Arrested Development alum in a few other roles. Even Adweek got in on the fun and suggested Bateman appear on the next season of The Good Place. Considering the circles of hell analogy, that's a pretty apt pick for a cameo. You know he'd bring a sense of humor to the beloved show.

Who knows if that'll ever happen, but in the meantime, you can satisfy your on-screen Bateman craving by re-watching the Hyundai ad on repeat. The commercial is definitely more fun than, say, going to jury duty, getting a root canal, being stuck in the middle seat of an airplane, or having "the talk" with your parents. Way more fun.