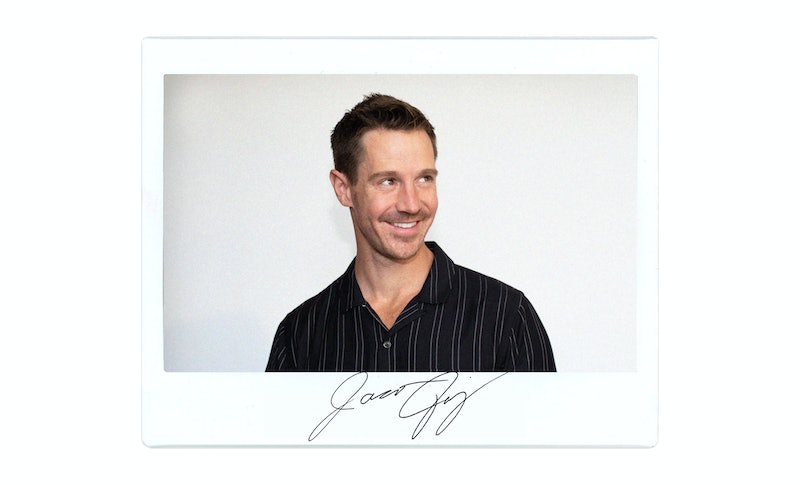 When celebrities hang out with Bustle editors, we want to give them the chance to leave their mark. Literally. So we hand them a pen, a piece of paper, a few questions, and ask them to get creative. The rest is up to them. This time, Veronica Mars star Jason Dohring is leaving his mark in the Bustle Booth.

The summer that Veronica Mars premiered 15 years ago in 2004, the Olympics were unfolding in Greece, Ken Jennings was winning $2.5 million on Jeopardy!, and somewhere in a suburban mall, you could find 22-year-old Jason Dohring, Kristen Bell, and other cast members of the teen detective drama signing autographs for an upcoming show on the now-defunct UPN.

"Those people [at the malls] had no idea who we were. [The show] had literally not been released," Dohring tells me while stopping by Bustle HQ. But when Veronica Mars did premiere, he realized that the audience that was responding "was smart." After all, he says, "You'd have to be smart to find the UPN."

The show slowly built a small but loyal fanbase, but it ultimately wasn't enough to prevent it from being canceled after three seasons. A teaser pilot, thousands of YouTube LoVe videos (which Dohring says he's watched a couple of), and a $5 million-plus, fan-funded 2014 movie later, it was clear that those "smart" fans were still itching for more. Enter Hulu, the streaming platform that snatched up the rights to the first three seasons and brought the cast back together to release the fourth season of Veronica Mars earlier this month.

In Season 4, Logan is a new man who's a far cry from the Logan that Dohring was playing during his mall tour years. That Logan hung out with Paris Hilton. That Logan led the super rich and super popular "09er" high school clique. That Logan was described as the "obligatory psychotic jackass" in the pilot episode. But 2019 Logan, he goes to therapy and wants to get married. 2019 Logan works in military intelligence. And (huge spoiler warning) 2019 Logan is killed in the last five minutes of the season by an explosive the Neptune Bomber left in Veronica's car.

Despite his character's shocking fate and the consequent fan reaction, Dohring remains optimistic about his time on Veronica Mars. "I got to do [this character] for 70 hours," he says. "He was the asshole character, he was the romantic character." His death is important in another way too, ultimately prompting Veronica to seek therapy, something that realistically should have happened before Season 1 even began.

He seems to acquiesce in creator Rob Thomas' decision to kill of Logan at the end of Season 4 (Thomas said he wanted to move away from the "high-school soap" and leave Veronica single in order to focus on the noir mystery in the show's future), despite being pushed for answers as to why the controversial ending needed to actually happen.

"I totally understand where [Thomas] is coming from, where he wants to take the show and [to have] Veronica as the underdog," he says. But don't worry, Dohring is totally aware that the shocking final scene upset fans. As he said to me, "I feel for you."

Check out what else Dohring had to say in his Bustle Booth, including the TV mystery that still haunts him (it will look familiar for VM fans).