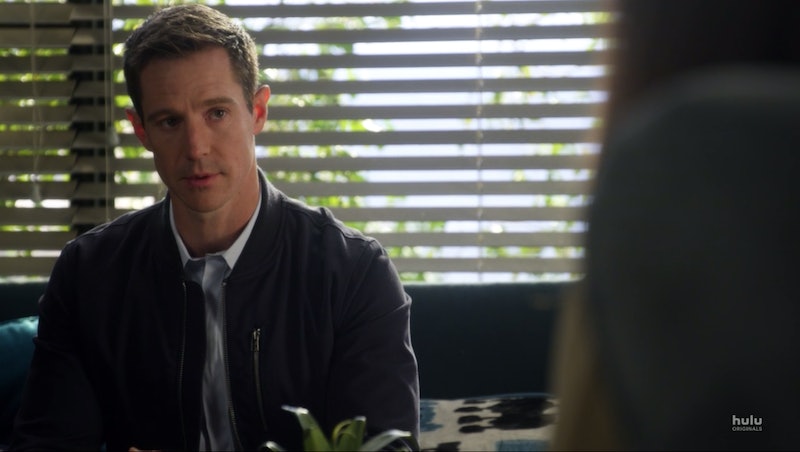 Spoilers for Veronica Mars Season 4 ahead. The new season of Veronica Mars was way too brief, though it ended with a literal bang. If Hulu renews the cult series for more episodes, it's going to have to look a little different. And given that explosive ending, it's hard to imagine that Jason Dohring would return to Veronica Mars. But there are ways Logan could come back.

You might want to sit down for this, even if you have finished the eight episode season. At the end of Season 4, Logan is dead. Very, very dead. He and Veronica got about two hours of marital bliss before he fell victim to a car bomb planted by Penn, the pizza guy.

Was is the ending Logan deserved? Absolutely not, but bad things happened to reformed people all of the time. Is he definitely dead? Ummmmm, probably. Those bombs were no joke. He could technically be hospitalized and in a coma or something if you want to cling to the "no body/no death" fan conspiracy theory for a little while. I get it. But given the ending with Veronica and the therapist, it doesn't seem likely. Would she really leave Neptune if Logan was hooked up to a ventilator in the hospital? Nah. Let's all assume and accept that that Logan is definitely dead.

Dohring could return to the show in flashbacks. At least two different scenarios call for that. First of all, there is a gap of time between the Veronica Mars movie and Season 4 that later seasons could dip into, memory-wise, during which the "LoVe" relationship we see in Season 4 began. (Speaking of, if you want more Logan and Veronica, go check out some of the Veronica Mars novels that cover those missing years.)

There as also some talk of Lilly Kane's murder in Season 4, oddly enough. If her case gets officially dug up, so will Logan's name. His father, Aaron Echolls, killed Lilly — right? Apparently, as the Murder Heads point out, not everybody thinks so. While it would be difficult to age down Dohring without CGI technology straight out of a Marvel movie, Veronica Mars' original murder could be a way to bring back the deceased character.

In an interview with Paste ahead of the (surprise) premiere, Dohring said he saw the series going forward with Season 5 "if it makes sense for Hulu. I think they’ve done a fantastic job in that way to set themselves up for a great success," he said. "I’ve seen some of the final scenes and I think it’s just going to be awesome in the way it can set up for a new series." Does that mean a new series... with or without him!?

Season 4 did a great job portraying what it looks like when a soapy, toxic teen relationship you swoon over grows up. Logan has a therapist, and actually works on his mental health and anger issues. He and Veronica weren't perfect, but they were trying. It'd be a shame if the show literally blows that up and doesn't explore his character (after death) any further. Fingers crossed, Marshmallows! This doesn't have to be the end.

More like this
Netflix Shut Down 'Bridgerton' S3 Rumours About A “Very Dark” Storyline
By Bustle
Michael B. Jordan Tackled His "Public Breakup" With Lori Harvey On 'SNL'
By Brad Witter
Here’s What Happens To Bill & Frank In 'The Last Of Us' Video Game
By Brad Witter
Shonda Rhimes Responded To The Surprise Exit Of A Day 1 'Grey's Anatomy' Figure
By Grace Wehniainen
Get Even More From Bustle — Sign Up For The Newsletter
From hair trends to relationship advice, our daily newsletter has everything you need to sound like a person who’s on TikTok, even if you aren’t.