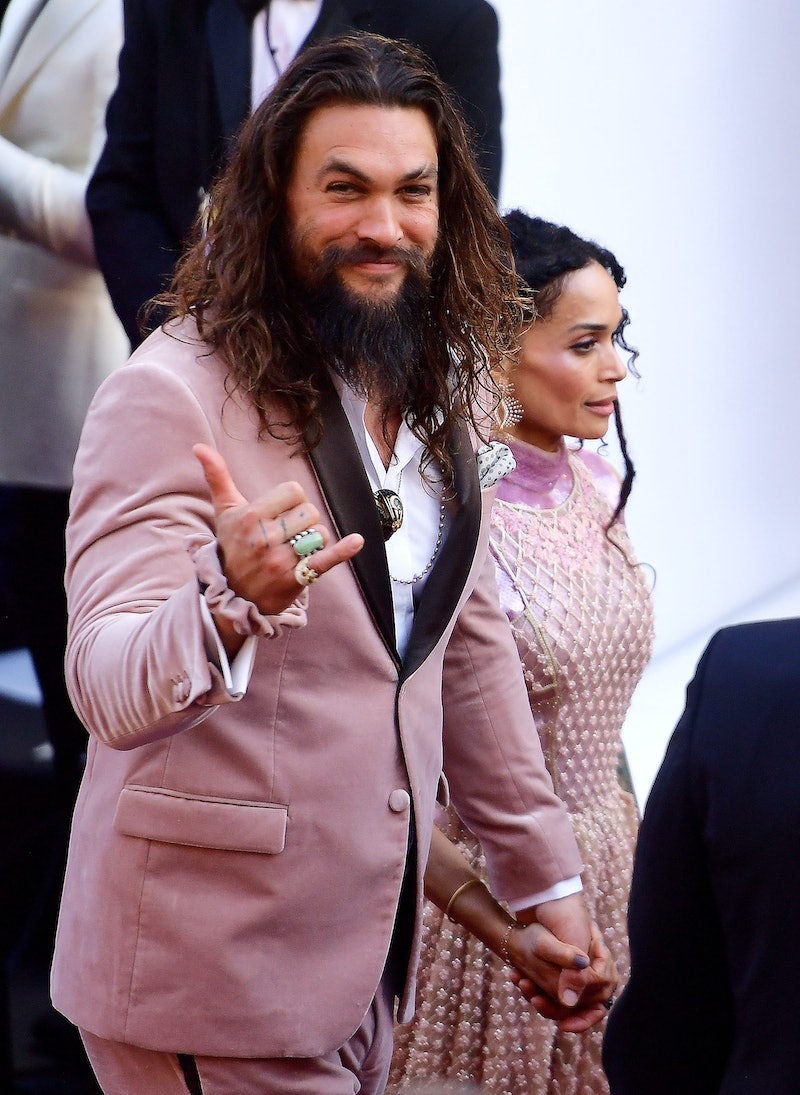 No one can make a pink velvet suit work. That is except for actor Jason Momoa. The Aquaman star rolled up to the Oscars red carpet in a pink suit custom made by Fendi. But what caught the eye of fans was the pink scrunchie on Jason Momoa's wrist. The velvet hair accessory was the perfect compliment to his blush suit, and just begged for the actor to sweep up his long hair into an '80s high pony.

If you found yourself quickly obsessed with Momoa's hair accessory turned bracelet, you were certainly not alone. The internet was quickly smitten over the coordinating blush scrunchie. Come on, you can't help but be thrown back to your Claire's days after one peek at this photo. It's enough to send you into a nostalgic spiral.

It's simply too good. Not only did Momoa match his wife Lisa Bonet, but he matched a scrunchie to his dang designer suit. My goodness.

Momoa told Access that his suit was actually designed around the now iconic scrunchie.

“Well the whole suit was built off of my scrunchie. I said I want a suit that looks like that. And so then Fendi made the scrunchie,” he said.

The Fendi scrunchie, which could possibly cost more than your life savings, even followed him onstage with actor Helen Mirren to present the winner for Best Documentary Feature. The accessory featured a tiny silver tag declaring it Fendi, and therefore superior (somehow) to the pink velvet scrunchie of your youth.

You have to stan a tough man with an eyebrow scar and a velvet pink scrunchie on his wrist. It's required.

The internet certainly had no hesitation falling unapologetically and completely in love with Momoa's perfect hair accessory. Because it was a scrunchie. On his wrist. That coordinated with his suit. His pink velvet suit. A pink velvet scrunchie. It is just all too much.

Honestly, who isn't here for it? Now if only he would put it in his hair. Then, we'd all faint in unison.

Just look at that mesmerizing scrunchie. Anything that can take your eyes off Momoa and queen Helen Mirren is purely magical.

Oh, you want to talk about actual awards? Literally there is no reason to do such a thing.

Come on, Academy. Give credit where credit is due. A new category is in order for this historic moment.

The sound you hear is the sound of millions of fashion lovers shrieking with pure, unrestrained glee. Gorgeous, isn't it?

This is permission for all of us to wear our wrist scrunchies proudly, even at nationally televised award shows filled with hundreds of celebrities in thousand dollar outfits and millions in diamonds. It just is, OK?

If you've ever been yelled at for "cutting off the circulation in your wrist" by wearing a scrunchie on your arm, take this as allowance to resist the status quo and parental scare tactics. Momoa is resurrecting a middle school trend, and he needs your support. Forget the haters and put that wrist scrunchie on proudly.

“I will [put the scrunchie] on later when I’m cutting a rug on the dance floor," he said." The scrunchie will be in!”

Now if only he would rock that '80s high pony at the after party. Then the night would be complete...

More like this
15% Pledge Director LaToya Williams-Belfort On The Impact Of Supporting Black Business
By Dominique Norman
These Are The Best Socks A Woman Can Buy
By Lisa Fogarty
How To Wear A Bucket Hat Like Rihanna, Dua Lipa, & More
By Allie Fasanella
Taylor Swift’s Latest Midnights Look Went Heavy On The Glitz
By Allie Fasanella
Get Even More From Bustle — Sign Up For The Newsletter