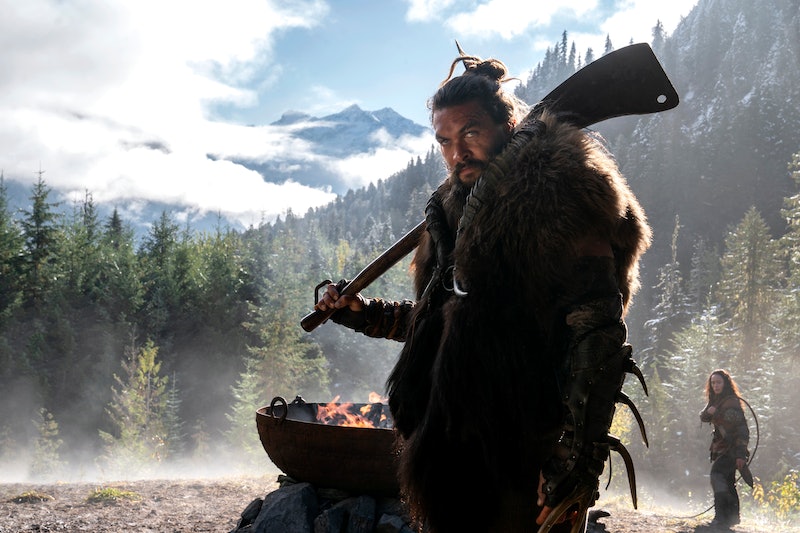 Jason Momoa was only on Game of Thrones for one season, but has spun that into a career of playing larger than life characters onscreen. Momoa's Apple TV+ See character, Baba Voss, certainly fits that bill. However, although Baba Voss may look a lot like Khal Drogo, this post-apocalyptic tribe leader has little in common with the Dothraki warlord that made Momoa famous.

"I hate comparing things, but the thing is, I didn’t get to exercise all the things that I’m capable of doing," he told Den of Geek about his time as Drogo. In See, however, Momoa gets to show off not just his towering physical presence, but his acting chops. "I wanted [to play Baba Voss] because I’ve never done anything like this before," Momoa told Uproxx. "Drogo was never able to get into a fight, he never really went into battle, he never had a baby, like, he just fell in love."

Baba Voss is the leader of the Alkenny tribe, a group of people who live in a post-apocalyptic version of Earth where all humans lost the ability to see centuries ago. At the time that See begins, the idea of vision is merely a myth, and it's Baba Voss' responsibility to help the Alkenny survive in the wilderness and stay away from the people trying to hunt his two children, who were born with vision.

Basically, if one were to compare Baba Voss to Khal Drogo, it's that Baba Voss is what would happen if Khal Drogo went to extensive therapy and learned how to better manage his rage. He's benevolent, not a rapist, and his jokes are a whole lot funnier.

At the beginning of See, Baba Voss is wed to a mysterious woman, Maghra (played by Hera Hilmar) who comes to the community pregnant from another man, Jerlameral. He is known to also be able to see and is therefore deemed a heretic. Baba Voss marries her anyway, and she gives birth to two twins who indeed are born with their father's sense of sight.

Playing the role of protective father and husband is markedly different than the domineering Khal Drogo, or even the revenge-minded Declan Harp in Frontier, and it involved an intimacy that Momoa says has translated into his own life. Momoa told Den Of Geek, "There’s just a beautiful moment where [Hilmar] and I sat there and it was just like literally going off the sense of smell. And it became a very beautiful, sensitive — I wouldn’t say sexy, but it’s a very intimate scene."

More like this
Melanie Lynskey Plays A “Ruthless Leader” In 'The Last Of Us'
By Brad Witter
'The Last Of Us' Episode Schedule Competes With The Super Bowl & Oscars
By Brad Witter
Grammys Host Trevor Noah Made Adele's Dream Of Meeting The Rock Come True
By Brad Witter
Pedro Pascal Barely Got Through The "Lisa From Temecula" 'SNL' Sketch
By Stephanie Topacio Long
Get Even More From Bustle — Sign Up For The Newsletter
From hair trends to relationship advice, our daily newsletter has everything you need to sound like a person who’s on TikTok, even if you aren’t.