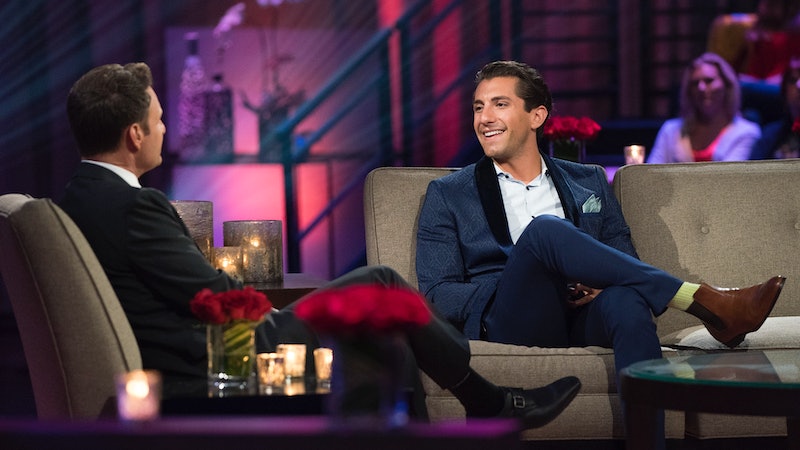 There were plenty of Bachelor fans rooting for Jason Tartick to nab the lead role this season. However, it seems like everything happens for a reason. During a Jan. 21 appearance on Good Morning America, Jason said he's happy he wasn't the Bachelor and the reason includes a sweet nod to Kaitlyn Bristowe, who he's recently sparked dating rumors with.

In the GMA interview, Jason admitted that he was "very thankful" about how things played out, according to Us Weekly. He explained, "[If I was the Bachelor] I wouldn’t have met someone very special to me right now — Kaitlyn."

Who can blame him? Why endure all those group dates and rose ceremonies with women he's not interested in, if he can just date someone from the Bachelor franchise on his own terms instead? Plus, they don't have to date in secret like he would have had to do as the Bachelor lead with his final rose recipient, waiting for the season to finish airing.

And of course, this new interview isn't the first time Jason talked about their connection. As fans know, these two have been far from secretive about their budding romance. In other words, Kaitlyn and Jason have been very open on their Instagram accounts and Kaitlyn's podcast Off The Vine.

During the Jan. 17 episode of Off The Vine, Kaitlyn's friend Clio De La Llave asked Kaitlyn if she calls Jason her boyfriend. Kaitlyn explained,

"It’s actually so strange to go from being engaged to thinking of someone as your boyfriend because I feel like that’s taking a step backwards. It’s not. If anything, it’s taking a step forward because you’re just growing and evolving as a person.”

During the same podcast episode, she confessed, "I never thought I would hang out with somebody from The Bachelor franchise!" She also remarked, "I was like, ‘You know what, I’ll just be a little more private, low-key. Whatever.’" However, anyone who follows these two on Instagram knows that they're far from low-key, at least at this point. Maybe it started out on a private note, but they've been documenting their time together in a pretty public way.

Jason also dropped in to record the Jan. 22 episode of Kaitlyn's Off the Vine podcast. Danielle Maltby was the featured guest, but Kaitlyn admitted to Jason, "People are going to be excited to hear from you, because you seem to be blowing up my Instagram and my Twitter feed. People seem to like that you hang out with me."

Jason came through with the perfect response: "I like hanging out with you too." Of course, this prompted Danielle to say, "It is pretty cute. I'm not gonna lie." Then, Kaitlyn admitted she and Jason FaceTimed her dad on their way to tape the podcast and that he watches her Instagram Stories. Oh, modern dating: meeting a girlfriend's dad via FaceTime and Instagram before actually meeting.

Kaitlyn even asked Jason about his Good Morning America comments. He insisted, "I meant every word." Kaitlyn responded, "I know you did! That's why it's so cute!" She added, "It's cute because you would say that to me not just being on TV." Jason confirmed, "100 percent."

Kaitlyn continued, "If he doesn't tell me that like five times in a day, I'm like 'Can you tell me? Can you say it again please?'" She even declared, "He is definitely here for the right reasons."

It sounds like things are definitely moving in a great direction for these two. Ultimately, they can thank their connections to the Bachelor franchise for their meeting, but their chemistry really is off the charts. Everyone who was rooting for Jason to become the Bachelor can look toward the positive here — he seems so happy. Plus, they don't have to wait for a new Bachelor episode once a week for updates.