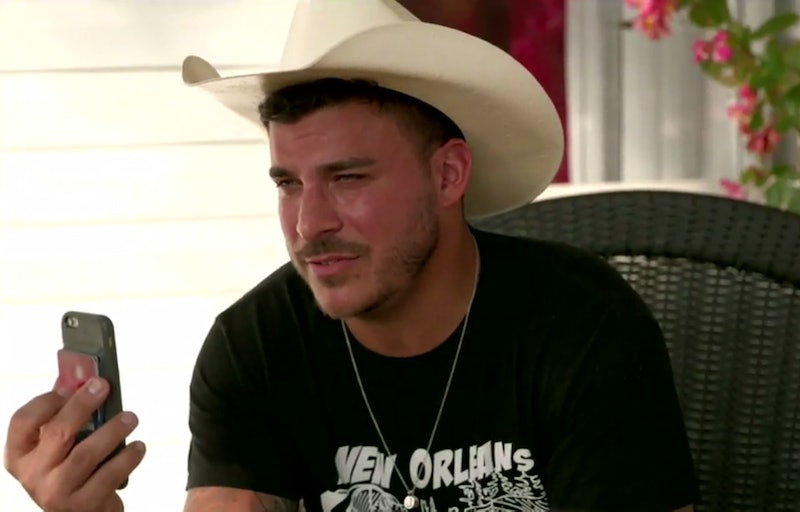 If you wanted more Pump Rules in your life, your wish just came true. There is now a Vanderpump Rules spinoff starring Jax Taylor and Brittany Cartwright titled, Vanderpump Rules: Jax & Brittany Take Kentucky. For real, this is happening and is coming to Bravo this summer. Rumors of a spinoff involving this Bravolebrity couple began circulating in January, but now fans no longer have to wonder whether or not the reports are true.

This Bravo series will focus on their relationship, while spending time in Kentucky with Brittany's family. Based on the trailer, it certainly has a different vibe than Pump Rules. Though, the drama is still very much the same. Jax faces a lot of questioning from Brittany's family about his intentions and just how serious he is about a future with her. Per usual, the couple also argue — a lot.

When the drama isn't the focus, viewers can watch Jax try to become one with the country lifestyle. Not only does he don overalls, but he wears a cowboy hat and even surrounds himself with animals — although, not willingly. Ever since Brittany came into Jax's life fans have heard about her former life in Kentucky, and in Season 5 viewers met her mother, which didn't go without plenty of drama — for Jax. Now, audiences will finally see where Brittany comes from.

The more Pump Rules, the better, in my opinion, but I do have a few mixed feelings about the spinoff. It just doesn't look like it's going to be that entertaining. Really, a Vanderpump spinoff is kind of hard to live up to the original. Here's hoping I'm proven wrong, and if it does fail, then let's keep those fingers crossed that a "Tom Tom" spinoff happens sooner rather than later.

I'm obviously going to tune into what looks like a disaster of a spinoff, and until I actually watch an episode, I'm also going to remain skeptical and continue to think that Jax & Brittany Take Kentucky is as ridiculous as it looks. Don't believe me? Here are some ridiculous moments from the trailer, so you be the judge.

He is basically terrified.

The only appropriate place to have a serious discussion.

And possibly being sprayed with "deer p*ss."

Really, he has an entire new wardrobe for Kentucky.

That's not the type of pole Jax is usually around.

With that, please head on over to Bravo to watch the trailer for yourself.

More like this
What’s New On Netflix: Ana De Armas’ 'Blonde' & A Nick Kroll Special
By Arya Roshanian
What’s New On Netflix: Meet 'The Real Bling Ring'
By Arya Roshanian
Jinkx Monsoon Is About To Get Real Sketchy
By Sam Ramsden
Kenan Thompson Pointed Out A Super True Detail About 'Friends' In His Emmys Monologue
By Grace Wehniainen
Get Even More From Bustle — Sign Up For The Newsletter