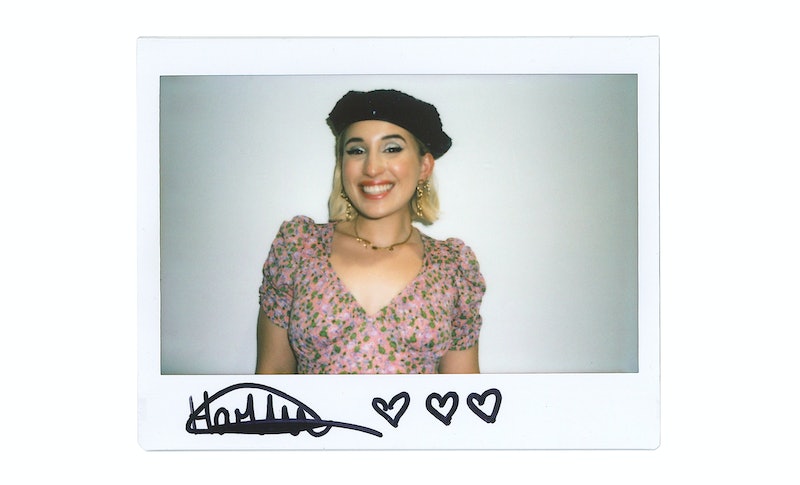 When celebrities hang out with Bustle editors, we want to give them the chance to leave their mark. Literally. So we hand them a pen, a piece of paper, a few questions, and ask them to get creative. This time, Jay and Silent Bob Reboot star Harley Quinn Smith is leaving her mark in the Bustle Booth.

"I have been told that that day was the worst I have ever been in my whole life," Harley Quinn Smith says of the day she made her film debut, playing the baby version of her father Kevin's character in 2001's Jay and Silent Bob Strike Back. "My parents bring this up constantly."

In 2019, the 20-year-old is much happier on set and starring in the sequel to Jay and Silent Bob Reboot, as Milly, a teen vigilante and the daughter Jay (Jason Mewes) doesn't know he has. The comedy, which is in theaters Oct. 15 and 17 through Fathom Events, is cameo-packed, featuring characters from throughout Kevin Smith's View Askew universe and new additions like Milly. But at its heart, it's a tribute to fathers and daughters and a family affair for the younger Smith in more ways than one.

She says she was "very, very stoked" to be playing opposite Mewes, "because he’s been such a huge part of my life and means so much to me." While Smith tells me that her process is not to bring any of her personal life to her actual performance, nostalgia was still in the air. "My dad constantly said that’s why he thinks the movie’s so good, because Jay was looking at me as the girl he’s known for 20 years," the actor says.

As close as she is to her dad and his buddies, however, Smith is determined to keep making a name for herself. Earlier this year, she played a member of the Manson family in Quentin Tarantino's Once Upon a Time in Hollywood, bonding with her costars on the meticulously recreated Spahn Ranch set, which — per director's orders — was phone-free. ("The first day, I felt like I was gonna shit my pants," Smith remembers. But soon, "we were spending all day talking and singing songs and reading books and playing games — like an actual camp.") She also made her own directorial debut with a music video for her band, the tenth, incorporating what she's learned from the filmmakers she's worked with, but still owning it completely.

As a creator in her own right, Smith's ultimate dream is to write, direct, and star in a biopic about her idol, Courtney Love, though she has "a lot of different films [she'd] like to make on the way there." Beyond thinking that the musician is "the coolest person in the world," Smith also relates to her. "Despite all of her individual success and the major change that she made in grunge and music in general, she’s not always acknowledged for her work," Smith says. "She’s always lumped in as the widow of Kurt Cobain."

As someone who refuses to rest on being "the daughter of somebody famous," Smith — 19 years after her first major role — is still just getting started.