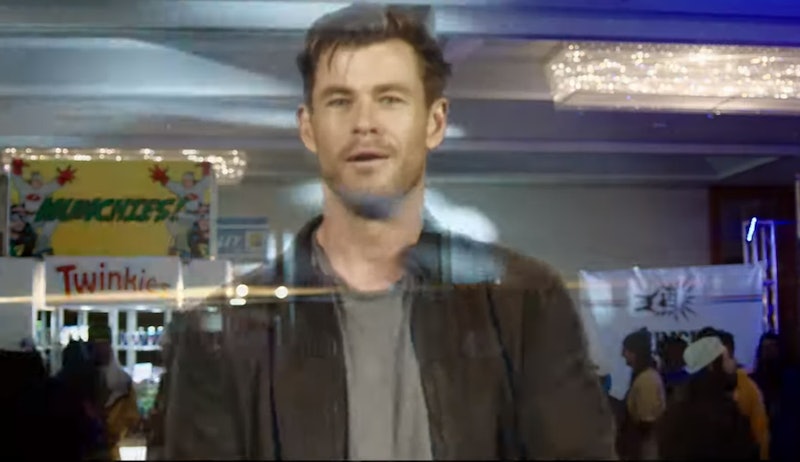 Let it never be said that Kevin Smith doesn't look out for his fans. On Thursday, the actor/writer/director released the first star-filled trailer for Jay and Silent Bob Reboot, ahead of the movie's Comic-Con panel in Hall H on Saturday, July 20. And whether you've been watching the comedy duo of Smith and Jason Mewes since the 1994 cult classic Clerks or you're new to their world of fandom humor, the trailer has something for everyone, including a cameo from Thor himself, Chris Hemsworth.

Smith shared the link to the trailer via Twitter alongside a message for Jay and Silent Bob aficionados. He wrote, "SNOOGANS! Rather than make you wait until Saturday night after Hall H, we’re gonna show you the #JayAndSilentBobReboot trailer RIGHT NOW! If you like it, come see the movie, me & @JayMewes on the #RebootRoadshow Tour this fall!"

The movie is scheduled to hit theaters on October 15, 2019, but the director's generosity means that you can watch the star-studded trailer right now. In addition to a potentially holographic Hemsworth (hey, the movie appears to be at least partially set at Comic-Con, so anything is possible), Jay and Silent Bob Reboot will also include appearances from Joe Manganiello, Matt Damon, Ben Affleck, Rosario Dawson, Craig Robinson, and James Van Der Beek, in addition to many (many) more of your favorite stars. Check out the (extremely) not safe for work trailer below.

As much fun as all those cameos look, the premise of the movie appears poised to take on not only reboot culture, but also the sudden revelation that Jay is a father. The official synopsis for Jay and Silent Bob Reboot reads, "The stoner icons who first hit the screen 25 years ago in CLERKS are back! When Jay and Silent Bob discover that Hollywood is rebooting an old movie based on them, the clueless duo embark on another cross-country mission to stop it all over again!"

Their quest leads them to the door of Shannon Elizabeth's Justice, who was first seen in 2001's Jay and Silent Bob Strike Back, and she reveals to Jay that they have a daughter together — Millennium Falcon. In one of several callbacks to the larger Smith-universe of films, Millennium Falcon is played by a hockey stick-carrying Harley Quinn Smith. Smith's real-life daughter Harley Quinn previously appeared in her dad's 2016 horror comedy Yoga Hosers as a young clerk who fights Nazi sausages with — you guessed it — a hockey stick.

If that kind of in-joke delights you, then you'll be excited to know the trailer also hints that there will be appearances from Clerks, Dogma, and even Chasing Amy characters. All of the films, including the new Jay and Silent Bob movie, are part of Smith's View Askewniverse. And he clearly delights in bringing all of his creations together.

Jay and Silent Bob have always blended absurd comedy and pop culture references, and with heavy-hitters like Hemsworth, Damon, and Manganiello on board to add an extra dash of humor (and fandom cred) the latest installment in this duo's stoner comedy adventure is sure to be a blast.