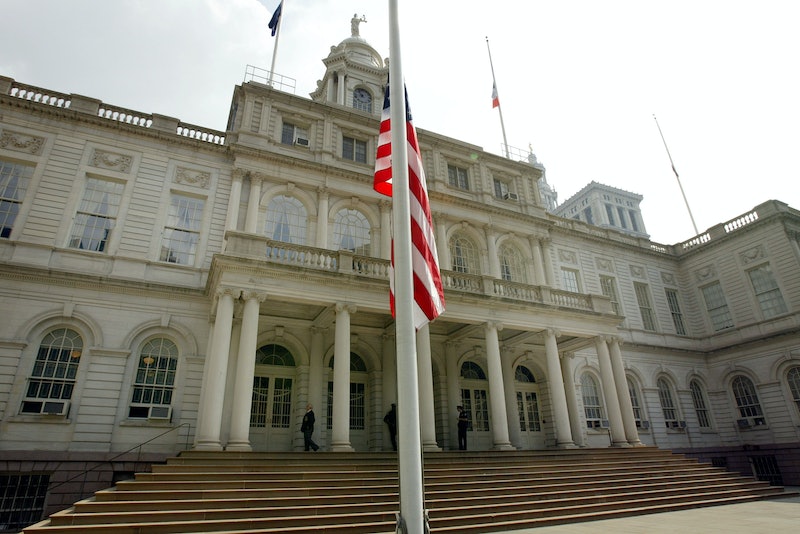 Two months ago, a viral video showing a 1-year-old child being ripped from his mother's arms in a Brooklyn Human Resources Administration (HRA) office sparked outrage across the internet. Now, the mother in that video, Jazmine Headley, has received an apology, by way of New York City Council.

Several City Council members extended apologies after Headley testified at a meeting on Monday, according to the Times. This included Council speaker Corey Johnson, who, as the Times reported, used the word "sorry" five times during his public apology. Johnson reportedly stepped down from his dais to hug Headley on the Council floor.

"I want to say I’m sorry. I’m sorry on behalf of the city of New York," Johnson said, according to video footage of the meeting. "I’m sorry you ever had to go to that HRA center. I’m sorry that you and your baby had to experience that trauma. I'm sorry that you were wrongfully kept on Rikers Island for multiple days away from your family. You deserve so much more than you received, and I’m deeply, deeply apologetic that you had to have this experience."

During her own time to speak, Headley pointed to the harsh way that she was treated in a place intended to help people. All the while, she said, she had been behaving calmly.

“It’s not just the fact that I was arrested. It was the harsh way that I was treated by people who are supposed to help me,” Headley said, according to theTimes. She later added, “In my case, I was just sitting. A peaceful act.”

After the events in the video, Headley was charged with a series of misdemeanors, including resisting arrest, acting in a manner injurious to a child, obstructing governmental administration, and criminal trespass, The Washington Post reported at the time. She was then sent to Rikers Island.

However, shortly thereafter, Brooklyn District Attorney Eric Gonzalez announced that all charges would be dropped, remarking in a statement that "continuing to pursue this case will not serve any purpose." He also said that "the consequences this young and desperate mother has already suffered as a result of this arrest far outweigh any conduct that may have led to it: she and her baby have been traumatized, she was jailed on an unrelated warrant and may face additional collateral consequences."

On the day the video was taken, according to eyewitnesses as well as multiple subsequent reports, Headley had gone to the Brooklyn HRA office with her 1-year-old child. Because all of the chairs in the waiting room were occupied, Headley reportedly sat on the floor. A security guard then confronted her, but Headley did not move. The situation escalated until the police were called, and Headley was ultimately arrested. The video footage, which included her son being ripped out of her arms, swiftly went viral.

The City Council has now, according to the Times, introduced a package of bills aimed at preventing such a situation from happening again.