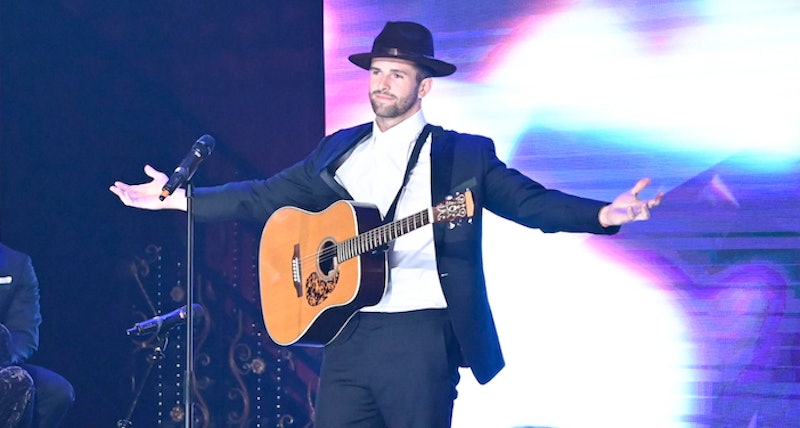 Competing against 30 other men for the heart of the Bachelorette is a tough job. You have to find a way to stand out, to be open and vulnerable, and to, well, not get sent home. It helps if you have a good smile and a winning personality, but it's also pretty beneficial if you can serenade said Bachelorette. Which is why Jed's job gives him a leg up on the competition: how could Hannah B. resist a dreamy southerner singing her love songs? When he pulled out the guitar on night one, she already seemed pretty smitten.

According to his ABC bio, Jed is a 25-year-old singer-songwriter currently living in Nashville, Tennessee. He grew up in the Smoky Mountains — just like Dolly Parton, another Nashville music legend — and he is, as his bio states, "looking for a forever type of love." He says he became a singer because he "finds it easiest to express his feelings and be vulnerable through his music." That makes sense, since artists often funnel their personal lives into their chosen creative outlet. Jed's last relationship ended so badly, though, that it caused him to stop making music all together. Falling in love with Hannah could help him rediscover his passion, which is an amazing story for ABC to be able to tell.

Jed has been singing, oh, basically the whole time he's been on The Bachelorette so far. He sang something about "Roll Tide" to Hannah on the first night (and he got one of the first kisses), and then he sang on the pageant group date and landed the first group date rose. Two occurrences don't exactly make a pattern, but it certainly seems like Hannah really, really likes being a muse for Jed.

There's also one more job that Jed may or may not be currently doing that sort of has to do with his music — up until recently, he was a dancer at the Music City Male Revue, described on its websites as a male-centric burlesque show in Nashville. It's hard to tell if he's still a dancer, as there's no roster on the site, but according to the tag in this photo, Jed is or was a singer and dancer in the show. Here's another snap of him at a show with Shannon from Very Cavallari.

And hey — there's no shame in his game. Jed is clearly doing what he can to make his dreams of singing happen, and he has to pay the bills somehow. If you have a body like that and a voice like that, why not use it Magic Mike-style to make some bachelorette parties very, very happy? Jed is working on his music, working on his fitness, and working on dancing his cute little tush off, but mostly, he's working on charming Hannah while hoping to find true, long-lasting love. So far, he seems to be off to a great start, but time will tell if he sings his way to the final rose.