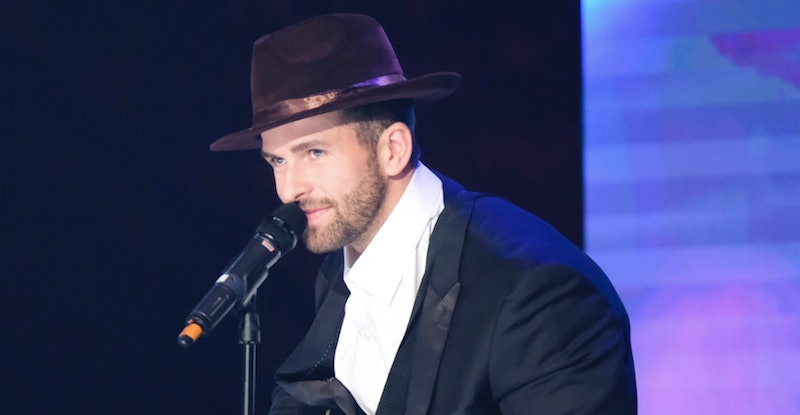 Not everyone comes on a show like The Bachelorette for "the right reasons." However, it is rare to see someone actually admit it on national television. And yet that's precisely what Jed did last week during his one-on-one date with Hannah B., which ultimately worked to his benefit in the end since he still managed to walk away that evening with a rose. But while some people may still be wary of his intentions, Jed's reason for telling Hannah why he came on The Bachelorette seems to indicate that if he wasn't here for the right reasons before, he is now.

By now, fans are well aware that Jed is an aspiring musician. In fact, he used his vocal and musical talents to woo Hannah during the group date pageant competition. But it turns out that Jed didn't just have romance on the mind when he signed up to do the show. During his one-on-one date with Hannah, Jed admitted that he came on the show to advance his music career, knowing that the elevated platform the series can provide could help for him to attain more fans and really get his name out there. He wouldn't be the first person to join the Bachelor franchise with that idea in mind, but for him to own up to his mistake so willingly before getting caught and forced to tell the truth, speaks a lot to his character and how his feelings for Hannah are genuinely progressing.

“Hannah said she wanted us to be open and honest and I didn’t want to go another day without her knowing the truth,” Jed explained to his followers on his Instagram stories on Monday, June 10, which can be viewed on Us Weekly. “I knew some people would take it the wrong way but what mattered to me was being honest so we could focus on our relationship.”

It's true that some fans still aren't sure what to make of Jed's confession and are wary to trust him even now that he's opened up to Hannah about it. However, it's understandable where he was coming from at the time. When this first started he didn't know who Hannah was or what to really expect from the show. But to his credit, the moment he began developing feelings, he wanted to make sure their relationship wasn't starting out on a lie.

“When I signed up for the show, I was so clueless. I was open to the idea ‘cause I love love. I do,” Jed told Hannah during their date last week. “But my first thought was, you know, ‘This is a huge platform.’ I just want you to know the truth. So I came in with that mindset.”

Moving forward, though, Jed assures Hannah that he's there for her and her only, adding:

“Every moment that we’ve had has just kind of taken all that away and showed me that, like, now, more than anything, I want to be with you. Now that I see who you are, that’s all I want. I feel something growing inside of me that I’ve never felt before. I’m starting to feel like I’m falling for you more and more. It’s beyond a show at this point.”

It turned out that Hannah respected Jed's honesty and loved how passionate he is about music. So as long as Hannah knows the truth and is OK with it, then that's all that really matters.