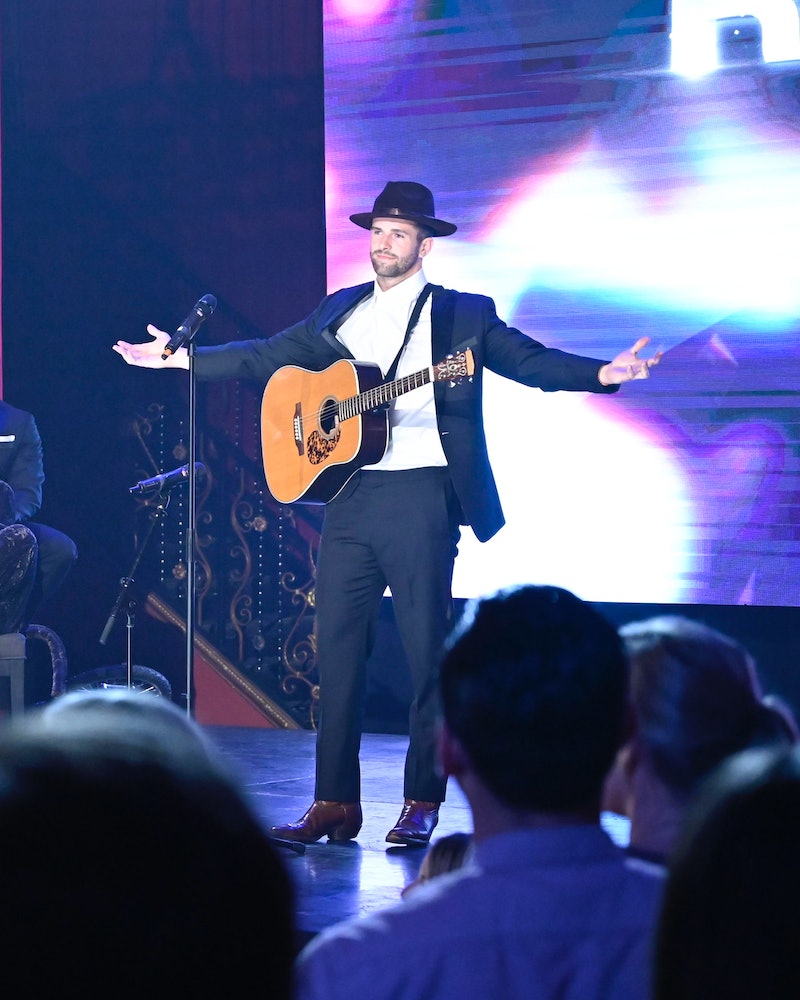 Tonight on The Bachelorette, Jed admitted the reason he came on the show, and it was definitely not for the right reasons. Jed told Hannah he came on The Bachelorette for his career during their dinner date and it was a pretty bold move. He says he was open to finding love, but he was very aware of the "platform" that the show would give him. But luckily, he seems to have saved himself — Jed goes on to tell Hannah that that's all out the window now that he's spent time with her, and he's all in on their relationship.

As you probably know by now, Jed is a musician, and he's already broken out the guitar once or twice onscreen. It makes sense that people looking to find a big break would jump at the chance to appear on national television and potentially showcase their skills. It's happened before, and now in the age of the Instagram influencer, you never know anyone's true motivations.

But the way Jed came away from this interaction with Hannah unscathed, even after admitting his misguided motivations to her, is kind of astounding. Jed bet big, and he came away a winner. Hannah says she respects his enthusiasm for music, and she'd never want to take that from him. She also thanks him for being honest and admitting his original motivations to her, and he lives to woo another day.

Some Twitter fans of the show were NOT on board with his admission:

But some of them applauded his decision to be up front about it:

Honestly, I guess it's better for Jed to come clean about his intentions up front rather than allow Hannah to find out after the fact once they're back in the real world. He definitely didn't have to tell Hannah that he came on the show with his music in mind — that could've been his own personal secret while he waited to see how things play out. So maybe that honesty does signal that he's had a change of heart, is fully committed to exploring their relationship with each other, and wants to do so without any lingering secrets between the two of them.

It's also a gamble on Hannah's part to keep him around after such an admission, especially after so many people put so much weight in being on the show "for the right reasons." Obviously you want someone who's open to a relationship, but it's an inevitable evil that some people will be in it for the exposure. Hannah's decision to not immediately send Jed home really speaks to how much she must feel for him, and how much she must trust that his intentions have actually changed.

Only time will tell if Jed will be in it for the long haul, but honesty is always the best policy when it comes to The Bachelorette. If he's being genuine, it means he's able to admit his mistakes and his faults, and that he's ready to be open with Hannah about the realities of their situation. It was a risky move, but for now, it seems to have paid off.