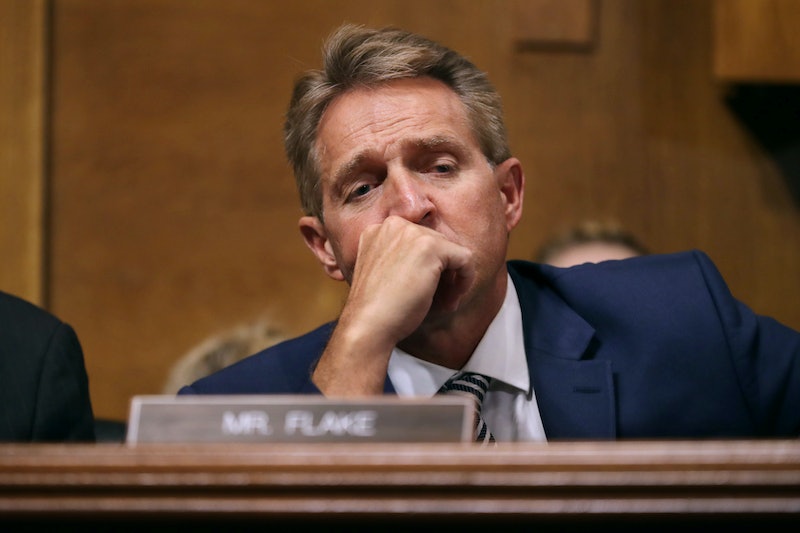 Though the newest Supreme Court justice has been sworn in, many are still trying to make sense of the process that got him there, including one lawmaker who played a pivotal role in his confirmation. Speaking with The View on Tuesday, Jeff Flake said Brett Kavanaugh was "persuasive" in his testimony, but that he wasn't ultimately certain whether or not he believed him.

“[Kavanaugh] was very persuasive," Flake told the television show's co-hosts. "I don’t know. I don’t know. I wish I had the certitude that some of my colleagues expressed. But I said on the [Senate] floor before that hearing, we’re likely to hear the hearing with as much doubt as certainty. And that’s how I felt afterwards.”

Flake is retiring from the Senate at the end of his current term. It's not uncommon for elected officials to grow increasingly candid as certain chapters of their public lives come to a close.

"I would have liked a broader investigation that started sooner… It wasn’t a broad investigation, but it was thorough," Flake said, according to footage of the segment shared online. "I wish that the country could have read that report. I don’t want to get in the habit of making background investigations public … But it was thorough for the scope that it was. It did address and interview everybody everyone who was there, that was said to have been there."

In discussing those interviewed during the investigation, Flake was referring to the first accusation against Kavanaugh. According to Dr. Christine Blasey Ford, Kavanaugh assaulted her at a party while the two were underage teenagers.

Kavanaugh has repeatedly and consistently denied this allegation. Kavanaugh said in a statement, "This is a completely false allegation. I have never done anything like what the accuser describes — to her or to anyone."

While on The View Flake said that some of the criticism levied against Kavanaugh's confirmation process was valid. Still, he said, there was another side to the argument.

“If the mere allegation with no corroboration is sufficient to disqualify someone, we’ve entered a new phase that we probably don’t want to enter,” Flake said.

Flake also spoke about what it was like being confronted in an elevator by two women who said they were sexual assault survivors, describing their efforts as "effective." "The president said they were paid protesters and I don’t believe that," he said. "They had a story to tell and they wanted me to hear it. And it was effective, too. I was unsettled about the process."

In the end, of course, Kavanaugh was confirmed to the Supreme Court. However, Flake said that he believed a shift was taking place regarding how the public responds to sexual assault allegations.

"The #MeToo movement is real and needed and good," Flake said. "I felt for them. You could tell that it was genuine. I just want them to know that we hear them."

More like this
What Is 'Pretty Wild' Star Tess Taylor Up To Now?
By Morgan Leigh Davies
Where Is Armie Hammer’s Ex-Wife Elizabeth Chambers Now After 'House Of Hammer'?
By Grace Wehniainen and Radhika Menon
After The Bling Ring, Nick Prugo Was Embroiled In Another Scandal
By Arya Roshanian
Lori Vallow’s Son Was Arrested For Sexual Assault Days Before 'Sins Of Our Mother' Premiered
By Brad Witter
Get Even More From Bustle — Sign Up For The Newsletter