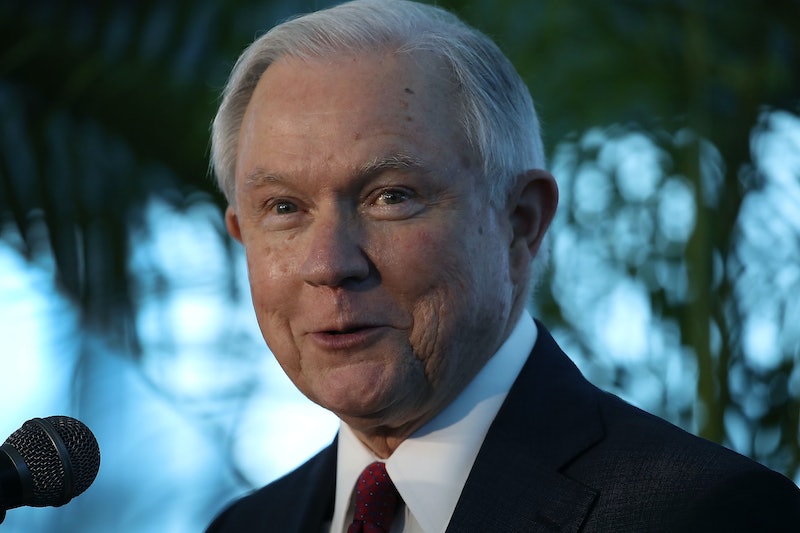 On Tuesday morning, Attorney General Jeff Sessions officially announced that the Trump administration would be ending the Deferred Action for Childhood Arrivals program. Implemented in 2012 by President Barack Obama via executive order, DACA prevented those who were brought to the U.S. as young children from deportation, and granted them work permits. During his short speech announcing DACA's end, Sessions's expression provoked anger from Twitter users.

"I'm here today to announce that the program known as DACA that was effectuated under the Obama administration is being rescinded," Sessions said at a press conference, calling Obama's executive order on DACA as "an unconstitutional exercise of authority by the Executive Branch." Sessions said the Justice Department had encouraged the Department of Homeland Security to "begin an orderly, lawful wind down, including the cancellation of the memo that authorized this program."

The Trump administration has said that the DACA program will end in six months and it is up to Congress to pass legislation that decides the fate of those covered by the DACA, who are often called DREAMers.

"Jeff Sessions is always giddy when he can use the power of Govt against the marginalized of society," tweeted one Twitter user. Another Twitter user, referring to the attorney general's controversial history on racial issues, added:

A six-month lag time "will enable DHS to conduct an orderly change and fulfill the desire of this administration to create a time period for Congress to act — should it so choose. We firmly believe this is the responsible path," Sessions said on Tuesday.

President Trump also made it clear that he was relinquishing any possible responsibility to resolve the fate of those participating in DACA to Congress. "Congress, get ready to do your job - DACA!" he tweeted on Tuesday morning, prior to Sessions's speech.

Sessions justified the Trump administration's decision to end DACA in six months' time by saying that it was necessary to do so in order to maintain the nation's rule of law.

However, Sessions's claims to "compassion" infuriated some Twitter users who followed his speech. Wrote one Twitter user:

Jeff Sessions said ending #DACA is the most "compassionate" thing to do. But clearly he has no idea what compassion means. He's proven that.