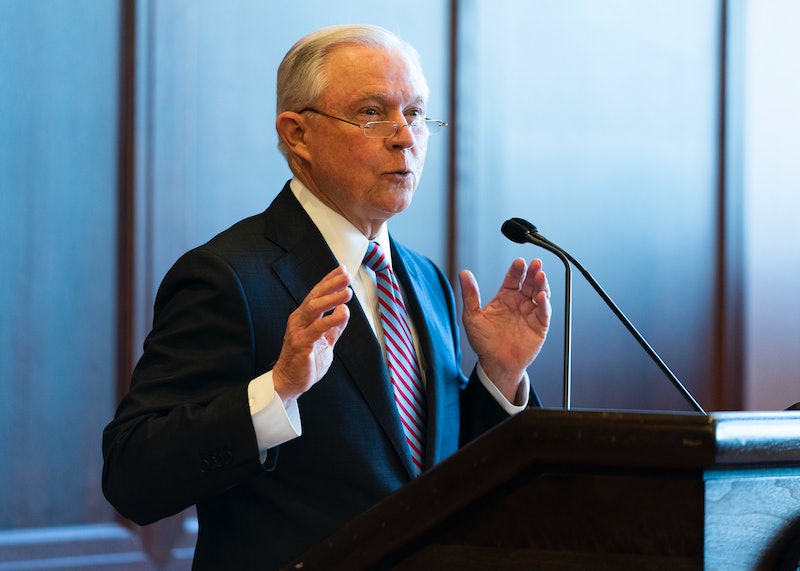 The U.S. attorney general doesn't agree with comparisons between the Trump administration's detention centers for migrant children and Holocaust concentration camps. But the reason Jeff Sessions says Nazi Germany has no parallels to the border policy he enforces probably won't ease his critics' fears. Essentially, he believes the difference comes down to a minute detail — a detail that isn't entirely correct.

"It’s a real exaggeration, of course. Nazi Germany, they were keeping Jews from leaving the country," Sessions told Fox News' Laura Ingraham on Monday night. If immigrant parents are deported from the United States, their children return with them, Sessions added. If parents request asylum, however, their children stay in government custody.

A few days before Sessions' Fox News interview, former CIA Director Michael Hayden tweeted a photo of the Auschwitz concentration camp in Germany-occupied Poland with the caption: "Other governments have separated mothers and children."

Hayden later explained to CNN's John Berman that he was highlighting how Germany transformed from a democratic society into one that separated families in order to commit mass genocide.

"In 1933, what did we see in Germany? A cult of personality, a cult of nationalism, a cult of grievance, a press operation that looked like and was the ministry of propaganda and then the punishing of marginalized groups," Hayden said Monday.

To be clear, Hayden specified that what’s currently happening in the U.S. isn’t the same as Nazi Germany. But he believes the country could be heading in that direction — and he’s not alone in drawing those comparisons.

Sen. Dianne Feinstein (D-CA) made a similar comment on Monday. "This is the United States of America. It isn't Nazi Germany," she told MSNBC. "There's a difference. We don't take children from their parents, until now."

Others pointed out that Sessions' explanation of why his border policy isn't reminiscent of Nazi Germany was based on a false claim. In fact, Nazi Germany wanted to expel Jews from Europe before concentration camps were even built. Jews of Polish decent were sent back to Poland in 1938, where many were denied entry after the Polish government suspended anyone's Polish passport who had lived abroad for more than five years.

So in addition to not being a biblical scholar, Sessions is not up on his World War II history. But in general, you want to be able to say your policies are nothing like the Nazis’, not that your critics are making too much of the similarities.

Sessions, President Trump, and Homeland Security Secretary Kirstjen Nielsen have all defended the administration's separation of families at the border this month. "The United States will not be a migrant camp and it will not be a refugee holding facility," Trump proclaimed Monday.

Similarly, Sessions has argued that some people illegally crossing the border are doing so for financial gain, not to flee dangerous situations in Central America.

“We need to think it through, be rational and thoughtful about it,” Sessions said Monday. “We want to allow asylum for people who qualify for it, but people who want economic migration for their personal financial benefit, and what they think is their family’s benefit, is not a basis for a claim of asylum — but, they can make that claim, we will process it, and I will review the situation and make a decision.”

In contrast to the Trump administration's firm stance, two-thirds of Americans disapprove of separating children from their parents at the border, according to a CNN poll conducted by SSRS this month. Although Feinstein is currently trying to rally congressional support for a bill that would make separating families illegal, the White House has indicated that it won't support such a bill.