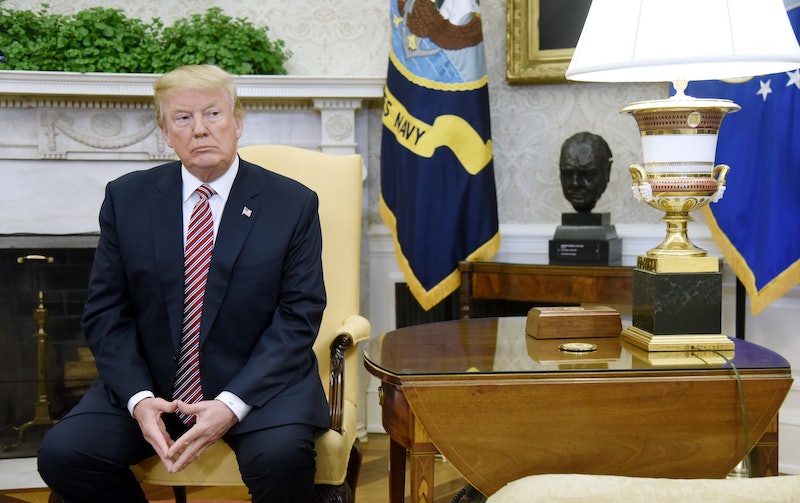 As the nation has learned over the past year, Donald Trump is more likely to side with the alleged abuser in cases of sexual violence — and now it's clear that he does the same in domestic violence cases. Over the weekend, an ex-wife of Trump's former White House staff secretary wrote an essay that had some real talk for the president on the subject of abuse. Jennie Willoughby, Rob Porter's ex-wife, wrote that by claiming Porter was innocent, Trump was insinuating her story of being abused by her ex-husband couldn't be believed. As Willoughby interpreted it, the president essentially called her a liar for going public with her allegations.

The essay isn't the easiest to read, as it's the work of a woman who says she was abused responding to criticism from the man holding the highest office in the land. It's absolutely necessary reading, however, if you want to get a sense of exactly how abuse victims are affected by rhetoric like Trump's. Both of Porter's ex-wives came out with stories alleging similar patterns of domestic violence, and Porter resigned in the fallout after the scandal came to light — still, Trump publicly insists that Porter is innocent. Despite his resignation, Porter also denies all allegations of abuse.

"When Donald Trump repeated twice that Rob declared his innocence, I was floored," Willoughby wrote in an essay for TIME. "What was his intent in emphasizing that point? My friend turned to me and said, 'The President of the United States just called you a liar.'"

Her next words are simple — and yet, they're still some of the most difficult to take in: "Yes," she wrote. "And so he did."

Willoughby's TIME essay goes on to explore the president's other comments on the subject and all the media reporting about him questioning her integrity. The real meat of the piece, though, is her thoughts on the way American society shelters abusers, and why it's really abuse victims who should always be given the benefit of doubt.

"Rather than embarrass an abuser, society is subconsciously trained to question a victim of abuse," Willoughby said by way of explaining why so many people from the White House jumped to Porter's defense. "I would call it an ignorant denial based on the residual, puritan, collective agreement that abuse is uncomfortable to talk about."

In the face of so much pushback, then, Willoughby has a message for all survivors of abuse — and for those who would question their stories:

Abuse is scary and demoralizing and degrading. It chisels away at your self-esteem and self-worth until you are unsure whether your version of reality is valid or not. If someone finds the strength and courage to come forward, he or she is to be believed. Because that declaration only came after an uphill battle toward rebirth.

Trump, however, has displayed a pattern of siding with men accused of abusing women — unless the alleged abusers were political opponents, like Democratic Sen. Al Franken and Rep. John Conyers. He very vocally sided with Alabama senatorial candidate Roy Moore, whom multiple women accused of sexually harassing or abusing them when they were teenagers. Moore denied the allegations, though, and Trump repeatedly said that Moore's denial was enough. He also spoke out in favor of Fox's Bill O'Reilly and Roger Ailes, both of whom were accused of and denied having committed sexual abuse.

Any comment that Trump makes on the subject of men abusing women, however, really just brings the focus back to the standing allegations of sexual misconduct against the president himself. Trump has flatly denied all of the women's accounts, saying "None of this ever took place" and "I don't do it. I don't do it."

And to comments like that, Willoughby offered a few words of wisdom, from the perspective of someone who claims to have been abused.

The first, meteoric wave of the #MeToo movement may have brought some awareness of the problem at hand and some important changes — but Willoughby's essay proves, yet again, that there is still a very long road ahead.