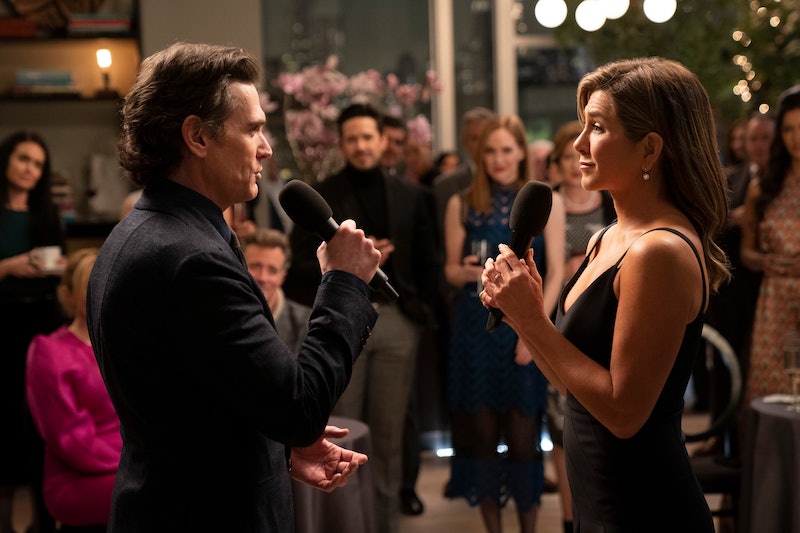 Since its early November premiere, The Morning Show has been battling to justify the price tag of adding yet another streaming platform to your cordless diet. Within the space of a single minute, Jennifer Aniston fans (Hi, me! And probably you!) could be convinced to pay double. In the Nov. 15 episode, Aniston's war-ready morning show host Alex Levy joins Billy Crudup's chaotically evil Cory Ellison for a duet of Sweeney Todd's "Not While I'm Around" while attending a well-heeled Manhattan cocktail party. Until this moment, the characters have been low-key enemies, which makes the electricity between them tricky to interpret. But why bother trying when Weatherman Yanko Flores (Nestor Carbonell) has already put it best: "It's weird and fascinating and I'm super into it."

The hobnobbing foes are at a live-piano karaoke fundraiser where rich people pay $1,000 for the privilege of singing show tunes to other rich people. (The money goes to the New York Theater Development Fund, but the applause is theirs to keep.)

Earlier in the episode, Cory half-attempts to offer a truce to Alex. "Hey, you good?" he asks her on approach. "Oh, please, you in a 12-step program? You want to make amends to me?" she snaps back. It's an indication of where they stand that even a hello can be plausibly read as a dig, which it almost certainly was. Who among us hasn't felt the sting of a strategically-timed are you OK?

"You were right," Cory tells her of the decision to name Bradley Jackson (Reese Witherspoon) as her co-anchor, powering through her reticence with compliments. "I think you're kind of a crazy genius." They're not exactly at cross-purposes here. Cory genuinely wants Bradley on their morning broadcast; Alex is less sure about Bradley but wants credit for the decision regardless. She knows there's whispers of replacing her. "Save your energy for your next kill," she tells Cory.

But where Alex means for him to leave her alone, Cory sees a dare, jumping on stage and (somehow) straight-facedly crooning, "Demons are prowling everywhere, nowadays, I'll send 'em howling" in Alex's direction. He invites her up to finish the duet with him. In other words, double-dare.

Earlier in the night, Alex tells her husband she doesn't have time for a drink: "I'm too busy controlling the universe." But on stage, trading lines with a song partner who is poised to fire her, the reins appear to slip. Her game face makes room for emotion. Shockingly, so does his.

But just like in Sweeney Todd, the lyrics — "Nothin's gonna harm you. Not while I'm around" — belie the context. In the musical, the number is shared between the pie shop owner Mrs. Lovett and a young street kid, Tobias, who sees her as a mother figure. It's haunting because despite her promises, she's already planning Tobias' demise. Whether this a moment pregnant with foreshadowing or just a fun chance to see Jennifer Aniston sing a show tune, The Morning Show has given its Anistans at least one good reason to watch.