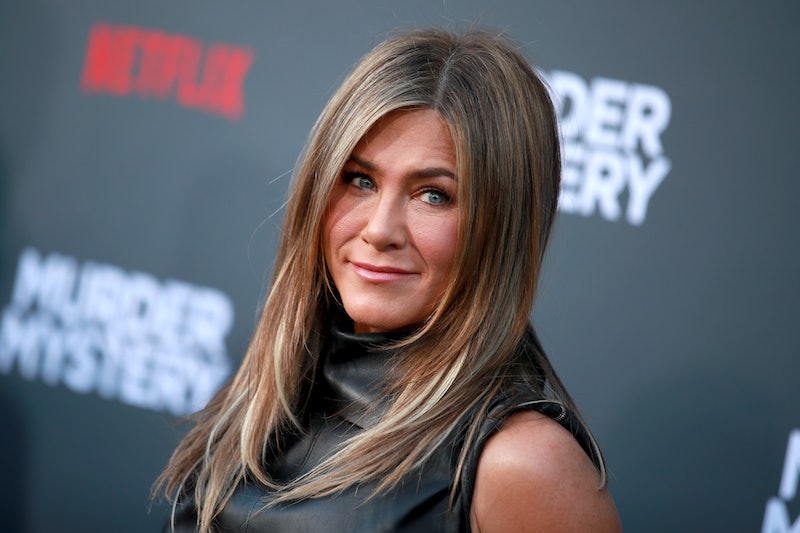 In a new SiriusXM interview with Howard Stern, Jennifer Aniston said she didn't want to join Saturday Night Live during the infancy of her career because it was a “boys’ club.” The Friends alum told Stern on a Tuesday, Oct. 8 edition of the Howard Stern Show that she once met with SNL creator Lorne Michaels. At the time, he wanted her to join the revered sketch comedy. This was prior to her career-turning role as Rachel Green, according to Aniston.

“I didn’t think I would like that environment,” Aniston told Stern of her disinterest at the time. “I remember showing up and [Adam] Sandler was there and [David] Spade was there, and I’d known them already, and they were like, ‘Look, Aniston’s here!'”

She further elaborated on her meeting with Michaels. “I just went to talk with him. I was such a young twit," Aniston said in the interview. "I was like, ‘I think that women need to be treated better here.’ Because it was such a boys’ club… You’re just not your brightest when you’re in your early 20s. I didn’t lecture [him], I was just saying what I would hope if I was to do this, what I would hope it to be.”

She also admitted that she was “thrown” by the fact that people had recognized her comedic chops. At the time, Aniston said she largely considered herself a serious actor rather than a comedian. When Stern noted that it had to have been insulting at the time to be considered a comedic actor over a serious actor, Aniston replied, “A little bit.”

Aniston showed her comedic chops on the hit sitcom Friends, which ran for 10 seasons on NBC between 1994 and 2004. She also proved she can do drama as well in films such as 2002’s The Good Girl and 2014’s Cake, in which she garnered a 2015 Golden Globe nom for Best Actress in a Drama. Aniston will next star in the Apple TV dramedy The Morning Show, which follows a morning news broadcast in the wake of a scandal, set to premiere Nov. 1.

While Aniston expressed disinterest over an SNL gig, she’s no stranger to the Studio 8H soundstage. She’s served as host two times on Season 25 on Nov. 20, 1999 and Season 29 on Jan. 10, 2004. Since then, the Friends alum has also appeared in various cameos, such as a December 2016 “Weekend Update” segment where Vanessa Bayer impersonated her ‘90s persona Rachel Green.

Aniston’s SiriusXM interview isn’t the first time she’s touched on taking on serious roles over comedic ones. In a February 2015 interview with Collider, she revealed that she “really had to lobby for” her Cake role since she had been known for comedic persona. “Usually, I don’t even get the opportunity to go in the room ‘cause it’s usually given to an actress that is already in the director or screenwriter’s mind," she said at the time. "Usually, I’m not put onto those lists. That just made me want, more and more, to find something that I could dig my heels into."

Jennifer Aniston on SNL rather than Friends? It seems like it could've happened.

More like this
The Black Lotus Staff Has "Had Enough" In The 'White Lotus' Spoof From 'SNL'
By Brad Witter
Who Is Pete Davidson Dating? He & Chase Sui Wonders Got Caught Kissing
By Jake Viswanath
At 28, Rosie Perez Risked Her Career To Stop Playing Stereotypes
By Gabrielle Bondi
'The Crown' Season 6 Has Suspended Filming "Out Of Respect" For The Queen's Death
By Bustle Staff
Get Even More From Bustle — Sign Up For The Newsletter
From hair trends to relationship advice, our daily newsletter has everything you need to sound like a person who’s on TikTok, even if you aren’t.