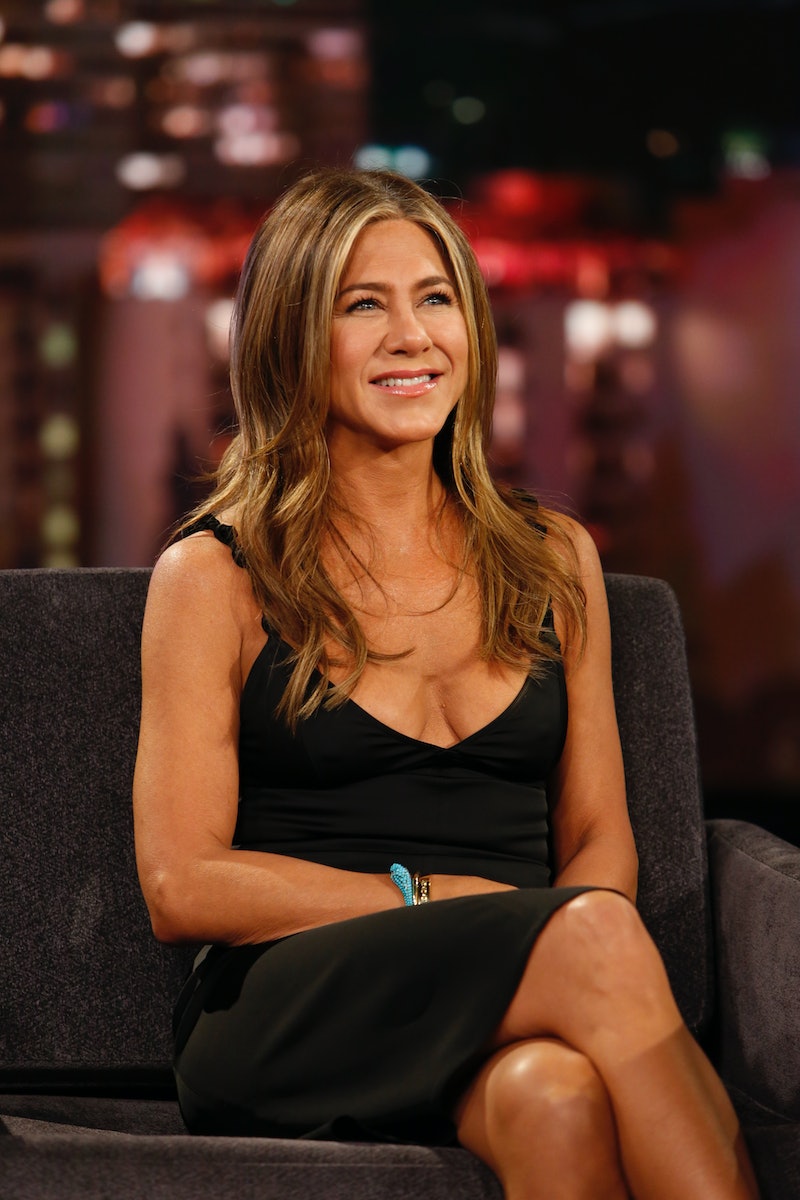 Just a few weeks after the show's 25th anniversary, Jennifer Aniston teased the Friends cast may be teaming up again for a mystery project. On Monday, Aniston was a guest on The Ellen DeGeneres Show and popped back on stage after her segment to surprise singer Charlie Puth, who happens to be a Friends superfan. While she dashed Puth's dreams of a full-blown reboot happening, Aniston offered a glimmer of hope by saying the cast was planning to work on "something."

When DeGeneres asked if the Friends cast would be reuniting on screen, Aniston said, "Like a reboot? No." Instead, the Morning Show star offered, "Listen, we would love for there to be something, but we don't know what that something is. We're just trying. We're working on something." DeGeneres asked if that something was a movie, to which Aniston replied, "No, we don't know. I don't want to lead people on."

Aniston's Ellen show appearance isn't the only time the actor has discussed a potential reunion. In 2018, Aniston supported a Friends revival on The Late Late Show With James Corden, saying, "The girls always say we would do it again, the boys are less excited about it for some reason." Yet earlier this month, Aniston admitted a reboot might "ruin" Friends on The Howard Stern Show. She said, "There’s an idea that if there’s a reboot of the show it won’t even be close to as good as what it was, so why do it?"

While Courteney Cox, Lisa Kudrow, and Aniston have remained close friends over the years, their male co-stars reunite less often, which made it all the more exciting when Aniston posted a selfie with the whole Friends cast on Instagram in mid-October. And earlier this month, Cox posted a selfie with Aniston and Matt LeBlanc on Instagram, writing, "A rare night and I love it."

It's not yet clear what exactly the cast will create together, but in January 2018, David Schwimmer said a Friends reunion would never happen, explaining, "Look, the thing is, I just don’t know if I want to see all of us with crutches or walkers." LeBlanc shared a similar jokey sentiment in March 2018: "Nobody wants to see Joey at his colonoscopy! Nobody wants to see that." As for Matthew Perry, he's echoed Aniston's worries that a revival might tarnish the show's legacy. "The thing is: We ended on such a high," Perry told Variety in 2017. "We can’t beat it. Why would we go and do it again?"

Since the Friends cast has repeatedly ruled out a revival (and Aniston already hinted it's not a movie), maybe they'll follow in Office alums Angela Kinsey and Jenna Fischer's footsteps and make a podcast.