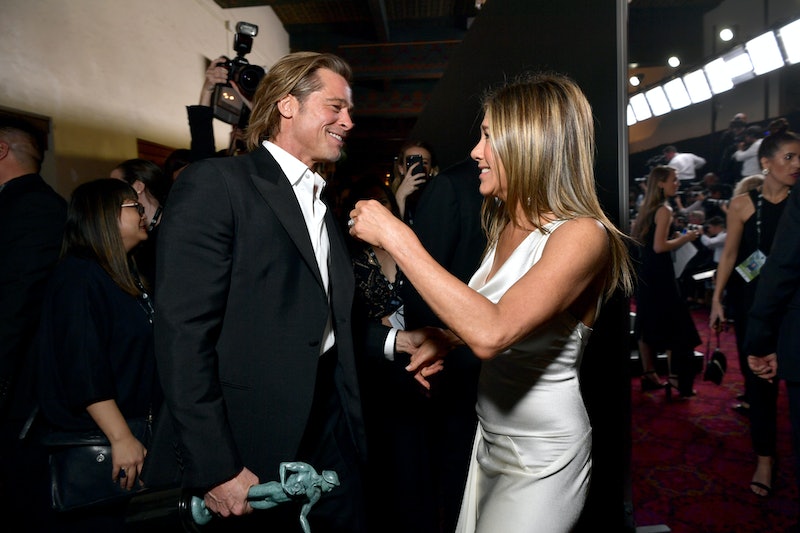 If there's one thing that the 2020 Screen Actor's Guild Awards proved, it's that exes Jennifer Aniston and Brad Pitt still know how to get the public whipped into a frenzy. The former duo reunited backstage after winning their respective categories, which has caused some to yearn for the two of them to get back together. And while neither actor has addressed that possibility, Aniston did say she'd welcome the idea of Pitt joining The Morning Show for its second season, if the opportunity presented itself.

“He’s more than welcome!” the former Friends star told Access Hollywood on the SAG Awards red carpet when asked if she'd be interested in working with him on-screen again. However, before the rumor mill goes into full throttle, she also made a point of mentioning that as of now the idea was “not on [her] radar" and that this is the first she's hearing about it. “They’re so interweb-by,” she stated, regarding fan speculation. “[Hearing that is] a first for me.”

The remarks are a testament that prove Aniston is, as always, the utmost professional and next-level classy. After all, working with one's ex isn't typically high on someone's to-do list, yet she'd be willing to set aside their personal history for the sake of the job.

That being said, even if Aniston didn't want to work with him ever again, that's completely her business. She shouldn't continually be under any obligation to interact with him or answer questions about him, for that matter. (How many times do you think Pitt gets asked if he'd want Aniston on set with him?) So if the collaboration does work out, then great. But if not, well, clearly she's been doing just fine on the series all by herself.

Aniston walked away with the award for Outstanding Performance by a Female Actor in a Drama Series for her work on The Morning Show. "I am so grateful,” she said during her acceptance speech. “Our extraordinary head writer created so many characters that are so layered and complicated and messy and ugly and beautifully human.” The last time Aniston took home a SAG Award was back in 1996 for playing Rachel Green on Friends.

Production of The Morning Show Season 2 is already underway and there doesn't appear to be a clear ending in sight. “We’re just beginning,” Reese Witherspoon said at the TCA press tour panel for the series, as per Deadline. “I feel like at the end of this ten episodes, there’s a whole new world order. It’s chaos. No one knows who is in charge and what leadership means at this point. I think that’s what we’re exploring in the culture right now as it goes topsy turvy, what is the new normal? I’m excited that we’ve got a lot more to explore."

Whether that journey includes Pitt remains to be seen, but even if it does, can we just let Aniston have this moment all to herself? She's earned it.

More like this
Nicola Coughlan Just Shared A Major Update About 'Bridgerton' S3
By Sam Ramsden
Everything To Know About 'Elite' Season 7
By Jake Viswanath
The 'Dead To Me' Creator Says Her Series Finale Idea “Felt Very True To The Show”
By Brad Witter
The First Trailer For 'That '90s Show' Includes So Many Nods To The Original Series
By Jack Irvin, Alyssa Lapid and Grace Wehniainen
Get Even More From Bustle — Sign Up For The Newsletter