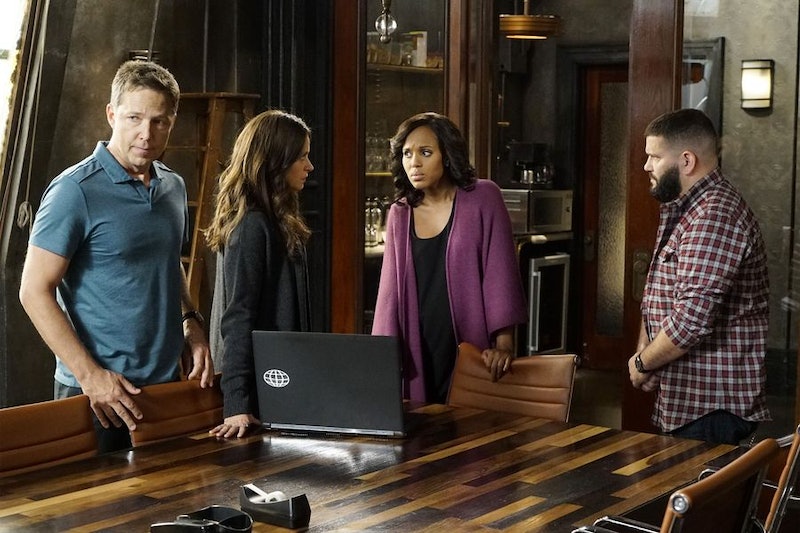 It's been a few weeks since we last left off with Scandal, but there's a lot going on this season. Cyrus was in prison after being framed for Frankie Vargas' murder, and the show's version of America still doesn't have a president-elect. But now, Olivia is that much closer to figuring out what actually happened on election night. On Thursday's episode of Scandal, Olivia finds out Eli may have been behind Vargas' assassination, and even though Jake seems like he's complicit in his mission, there's so much more to it than that.

So many questions were answered this week, and they all began with one very important revelation: Papa Pope has been involved all along. Of course, I should have assumed this from the beginning, but I was totally shocked when he and Jake were revealed to be working together after Vargas' shooting, and that shock only multiplied when Jake handed Olivia paperwork that proved someone withdrew money from a bank account in her name, making it look like she paid Tom to have Vargas killed and frame Cyrus for it in the process.

Thought this season couldn't get more dramatic? It just did. And it's just getting started!

Of course, Papa Pope played it off like he always does; he did it for Olivia, he wanted to give her what she wanted. But this one isn't her fault, and she is furious. And what happens when Olivia's furious? Nothing good for the person who pissed her off.

But then, another shocker: Someone from B613 used Olivia's name to keep her in line... without Eli's permission. And when he complains about it, the woman he's working with threatens to have her and Eli killed. And even though Eli ordered Jake to have Jennifer Fields killed — and to blow up her cabin — he didn't. He only made it look like she's dead, and although she's in hiding, he was able to introduce her to Olivia, who obviously has a lot of questions.

There's a lot left to learn about what happened on election night, and I can't wait to find out all the details. I knew Jake would be the hero here... at least, I hope he is. Anything could happen on this show.