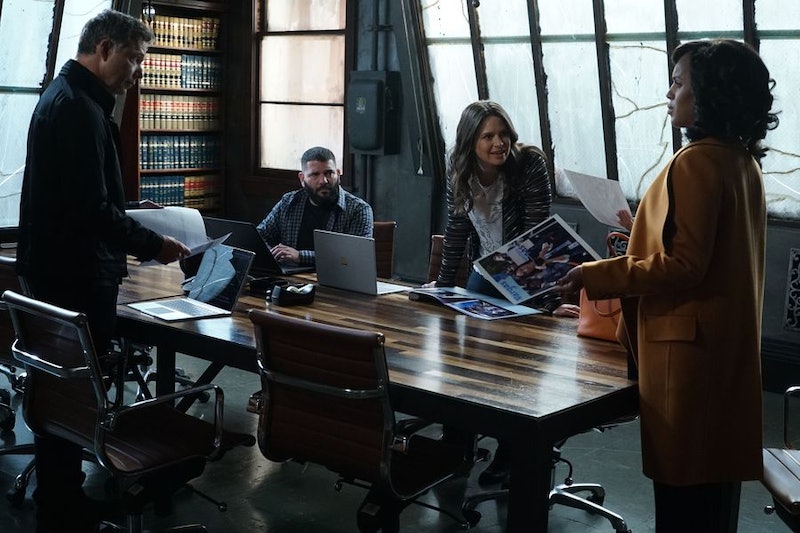 Of all the ways I thought Scandal's presidential election was going to go, the way it actually went on last Thursday's Season 6 premiere wasn't among them. I spent most of last season rooting for Mellie to win, but instead, Frankie Vargas took the electoral college... and then was promptly shot three times. After Frankie's death, it's hard to say who will be the president, but it's even harder to say who actually killed him. This week, the search for Frankie's killer continued on Scandal, and it seems more like it's Cyrus now than ever.

From the beginning, Olivia has been 100 percent convinced that Cyrus was behind Frankie's shooting. After all, he has plenty of motive, and he's always been a pretty shady guy, right? So to prevent Fitz from recommending him as the next POTUS, it was absolutely essential for Olivia and her gladiators to figure out if Cyrus is to blame, and after finding Jennifer Fields' deleted FBI tip line message, it seemed ridiculously obvious that it had to be him.

Oh, and then there's the fact that the number one suspect absolutely refused that he was responsible in questioning, even when he was offered a deal to confess to the shooting to be guaranteed prison without facing the death penalty.

But then, finally, Huck and Quinn find exactly what they've been looking for in the hundreds of hours of video footage they stole from the FBI's investigation: Cyrus and Frankie caught fighting on film. It gets pretty heated, and Frankie tells Cyrus he's putting him behind bars the second he's elected. And as soon as Olivia shows Fitz the footage, it's on.

More than ever, it seems like Cyrus is responsible for Frankie's death... and that Mellie could actually become president. But this is Scandal, nothing is set in stone, and anything could happen. Why is this show only on once a week?!