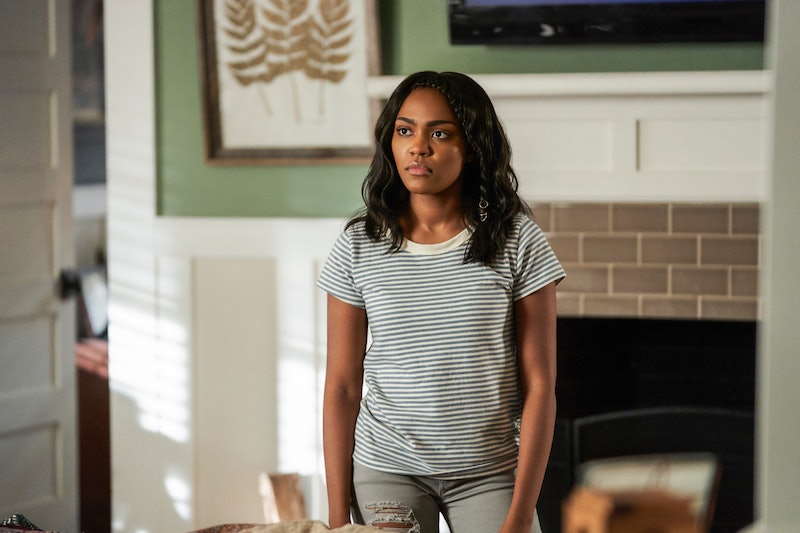 Spoilers ahead for Black Lightning Season 2, Episode 4. Things are not getting better for Jennifer Pierce. She’s making slow yet steady progress in her therapy sessions with Perenna, but it’s still not enough to resume her normal life, and now, it's looking like Jennifer's relationship with Khalil may be the one thing standing in her way — which could mean bad news for the rest of the Pierce family.

In the Oct. 30 episode, Jennifer is forced her to face her inner thoughts and fears during her latest therapy session. In her subconscious, she’s on her way to a school dance and posing for photos with her date when the moment is interrupted by a loud knock on the front door. Her dad answers and in comes Khalil, who then shoots paralyzing darts into Jennifer's family and date before engaging in a heated physical fight with her.

In reality, Jennifer is trying to contain her powers and place them in the box she created with Perenna, but her emotions are too intense to complete the task. Perenna says Jennifer is making progress and hints at unresolved feelings about Khalil being an issue.

Later that night, Jennifer tells Anissa that she doesn't know how she's going to cope with her moving out because she feels isolated from everyone else. Anissa starts to comfort her, but their conversation is interrupted by a text from Khalil. Anissa is understandably upset that Jennifer has been keeping in contact with the same person who “killed” Black Lightning, but Jennifer reassures her that she hasn’t responded to any of his texts.

Anissa then warns Jennifer to stay away from Khalil because he's not the solution to any of her problems. However, ignoring Khalil is apparently easier said than done. The next day, Jefferson and Lynn tell Jennifer about their decision to homeschool her — a choice brought on by some questionable decisions from Garfield’s new principal and a new potential threat from Lynn’s A.S.A. work. Frustrated, she rebels by escaping “house arrest” and meeting up with Khalil to finally have a conversation.

It remains to be seen how this will play out, but Jennifer reconnecting with Khalil is quite complicated for several reasons. First, now that Syonide is dead, he has become Tobias Whale’s right-hand man. Khalil owes Tobias his loyalty because he paid for the surgery that restored the use of his legs; as he previously told Jennifer, he has to follow Tobias' orders or his family could end up in danger.

So, even if Khalil means well, it’s hard to trust him when he’s working for the enemy. He doesn’t yet know that Jennifer is a metahuman, but she’s desperate to talk to someone about what's going on, and considering she knows Khalil has special abilities, she may make the mistake of confiding in him about her powers — or else an emotional moment could cause her to accidentally reveal them.

If this information gets back to Tobias, it might lead to him kidnapping Jennifer and perhaps discovering that Jefferson Pierce is Black Lightning, which risks the family's safety. The A.S.A members hunting metahumans have already put Black Lightning, Thunder, and Jennifer (who will later become Lightning) in danger, so they really don't need additional problems. Khalil still cares about Jennifer and probably wants his old life back, but so long as they're on opposite teams, nothing will ever be the same for them.

That being said, it might be necessary for Jennifer to finally confront Khalil. The problems with her powers are obviously connected to her unresolved feelings for him, and receiving some closure might be the final push she needs to get them under control. Plus, she may even be able to gain valuable insider information that would help her family defeat Tobias for good.

In the comics, Painkiller and Lightning never crossed paths. Per Bleeding Cool, Painkiller was a metahuman villain who was hired to kill Black Lightning in 1995's Black Lightning Vol. 2, but was thwarted during a showdown with the electric hero. Comic Painkiller had very little backstory, which makes him totally different from the well-developed Khalil Payne character in the TV series. Meanwhile, Jennifer/Lightning was not introduced until Kingdom Come #1 in 1996, according to Comic Vine.

So, this means their TV relationship is in uncharted territory. Is Khalil playing Jennifer, or is he looking for a way out of his servitude to Tobias? Will Jennifer find the answers she's looking for from her ex-boyfriend so she can control her powers? Or will this season end with an epic battle between Painkiller and Lightning? Only time well tell.