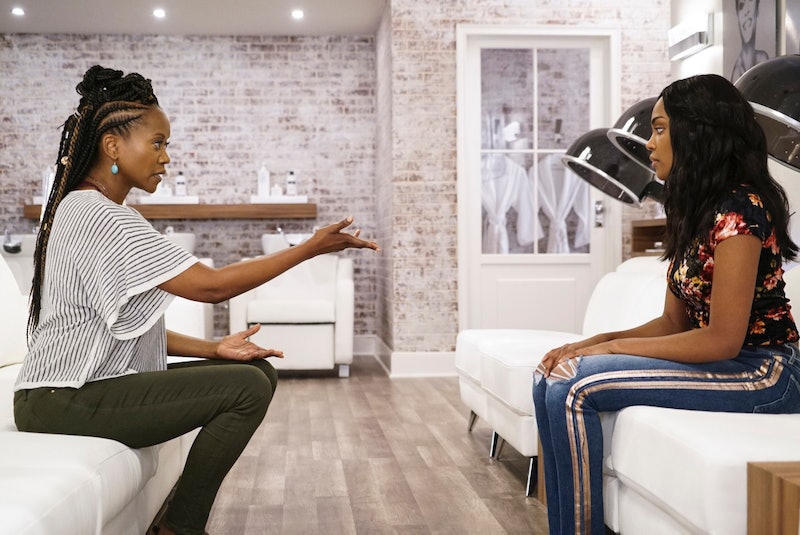 Spoilers ahead for Black Lightning Season 2, Episode 3. Everyone in the Pierce family is deep into their mission to control the chaos in Freeland...except Jennifer. In case you forgot, she's quarantined in the house until she learns to control her powers. But with the help of new Black Lightning character Perenna, Jennifer may finally be able to embrace her destiny as a teenage hero.

In the Oct. 23 episode, Jennifer is working on properly channeling her energy flares so her parents will let her resume her normal activities. While on her daily walk, she runs into a woman who suddenly stops her in her tracks and starts to stare. She then introduces herself as Perenna and says she's there so they can chat.

At first, Jennifer is suspicious. After she shakes Perenna's hand, they're both transported to a white room. Once there, Jennifer's skin starts to glow with a fiery energy, and she understandably freaks out. Perenna tries to calm Jennifer down, but to no avail.

Eventually, Jennifer discovers that her parents sent Perenna, a therapist with telepathic abilities, to help her learn how to safely manage her powers — and her emotions. When her parents come home, she angrily confronts them and says they did not take her feelings into consideration before making this decision. They apologize for making her feel like she was ambushed by a stranger (because that's obviously not cool) but insist that Perenna is exactly who Jennifer needs right now. Jefferson also admits that everything is his fault, as Jennifer inherited her powers from him, and that he wishes she didn’t have to live this life. They hug, and Jennifer warms to the idea of accepting Perenna's help.

Afterward, Jennifer and Perenna start their therapy session in an imagined safe space designed to help her explore her powers. Interestingly, it is a hair salon, which Perenna says has been a place of community, information, and power among Black women. Jennifer is not thrilled about a Black history lesson, so Perenna switches gears and says they will build a box to contain her feelings. Jennifer chooses gold to put her box in, but then the scene abruptly ends, and she keeps her answers vague when Jefferson asks her about the session. It's a strange interaction that makes it hard to gauge how Jennifer felt about the therapy.

At the end of the episode, Perenna and Jennifer meet at the Pierce home. Perenna says that Jennifer has to discover what her feelings are before she can place them in the box. They join hands and Jennifer screams loudly, engulfed by her own energy.

Does this mean Jennifer is afraid of becoming overly consumed with her powers, or is it just a reaction based on her fear of the unknown? It remains to be seen how this new pairing will work out, but these therapy sessions could be what Jennifer needs to guide her toward her rightful place as Lightning.

Perenna, for her part, doesn't have a comic book counterpart, but she will be around for at least three episodes, according to TV Line. There’s no word on if these episodes will be back-to-back or spread out, so it's possible the show will prolong the amount of time Perenna spends with Jennifer and we won't see what happens straight away.

Still, she seems to be on the right track with Jennifer, so hopefully her presence will help to get the budding teen hero where she needs to be. She'll have a tough journey ahead of her, but Jennifer has the grit and resolve to take it on.