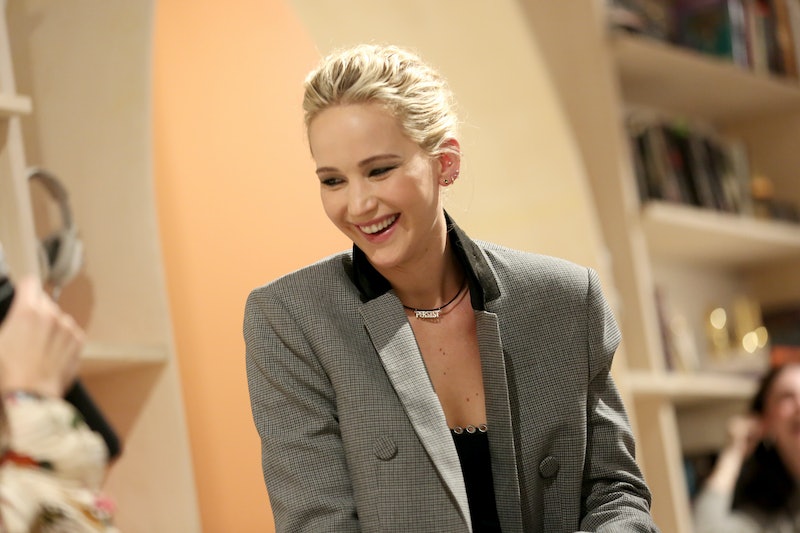 She won an Oscar at the age of 23, went on to become the highest-paid actress in Hollywood, and now, for her next big career move, Jennifer Lawrence wants to make a reality TV show. Surprised? You shouldn't be. Lawrence's love for reality television is well-documented, and her idea for the show is actually pretty interesting — think: The Bachelor, but on an island, and instead of the contestants looking for love, the premise revolves around breakups.

Lawrence appears on the cover of Vanity Fair's March 2018 issue, and she spoke to writer Krista Smith about everything from politics, to dieting, to her big idea for a primetime unscripted TV show. Smith asked Lawrence, "If you could make your own reality show, what would it be?" Judging by Lawrence's response, this is clearly something she's thought about before — at length, and perhaps, even to the point of seriously pitching the idea to her agent.

When Smith broached the subject of reality TV, Lawrence's face lit up with what the writer describes as a "Cheshire-cat grin," and replied, “I’m happy you asked, because I have actually been toying with the idea of becoming a billionaire and I’d like to start my own TV network."

Sure. Why not? She's already conquered the big screen, so taking on the small screen next makes total sense. "I am pretty much a television professional at this point," Lawrence said, "and I have a brilliant idea for a reality show called Breakup Island.” The actor went on,

“I can’t tell you the details, but there are very distinct cast members like The Bachelor, between the ages of 20 and 50, who you stay with and care about. That’s all I’m willing to disclose about Breakup Island because I really think it’s going to happen. My agent was laughing at me when I told him. But I am clearly obsessed.”

First of all, deserting a bunch of people on an island is always a good idea. But are we talking, like, a Bachelor In Paradise-type island? A super swanky resort? Or is she thinking it'll be more of a Survivor-style situation? Hunting and gathering and all that? Clearly, we need more details.

Second, good on her for opening the show up to the middle-aged men and women out there. Ageism is real, especially when it comes to reality TV romance. Although, considering the title of the show is Breakup Island, it's probably safe to assume that romance won't exactly be the name of the game. How will it all work, Jen? Inquiring minds need to know.

Lawrence certainly seems qualified to create her own reality TV show — based on her very public obsession with the genre, at least. Oprah Winfrey interviewed Lawrence for The Hollywood Reporter back in December 2017, and when Winfrey asked the 27-year-old actor who her dream dinner guests would be — living or dead —  Lawrence replied, "Scott Disick, Luann [de Lesseps] from Real Housewives of New York, Bethenny Frankel. And I'm not proud of that, but that's what comes from my heart."

Then there's her love affair with all-things Kardashian. It's pretty serious. From constructing her very own "Kardashian tent" during the filming of Mother!, to fan-girl grilling Kim as the substitute host on Jimmy Kimmel Live, to palling around/getting drunk with Kardashian-Jenner momager and matriarch, Kris — Lawrence is basically the reality TV family's #1 fan. That's got to count for something when it comes to creating a reality TV show of your own, right?

Fans will just have to wait and see if Lawrence is actually able to make her dream show a reality. In the meantime, though, I'd happily take a few additional details about Breakup Island to hold me over. And if Chris Harrison isn't free to host, Lawrence should totally take that challenge on herself.