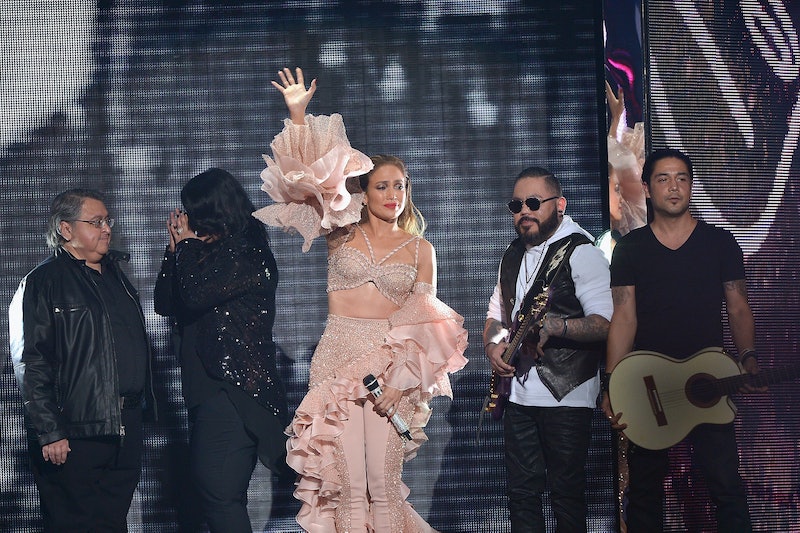 The classic 1997 movie Selena celebrated one of Tejano's biggest stars, Selena Quintanilla. Tragically murdered at the age of 23 in 1995, her memory lives on in all of her fans and, in part, thanks to this movie. Looking back 24 years after Quintanilla's death, and 22 years after the film premiered, star Jennifer Lopez revealed how Selena helped inspire her music career.

In an interview on Apple Music's Beats 1 show, as reported by E! News, Lopez shared some memories from the Selena set, including how playing the singer lead to her pursuing a music career. "She taught me so much on how to navigate this business, because I played it in the movie," Lopez said. In the film, J.Lo plays Selena from the age of around 18, through her rise to fame through her music, all the way until she was shot by Yolanda Saldívar at the age of 23. Lopez, who was 26 when she got the role, revealed that acting out Quintanilla's career certainly able to see how her story of being a successful musician spurred her urge to also be involved in the music industry. The role, she said, was a "beautiful blessing for my life on so many levels."

Working on the movie and learning about Quintanilla from the singer's family was "a beautiful time in my life and it taught me so much about life," Lopez said. "I didn't realize, at the time, the responsibility that I had, all I wanted to do was do her memory and that moment justice." In order to portray her so accurately, Lopez said she spent a lot of time with the Quintanilla family, even spending time in the singer's personal room. "I soaked up everything, I watched every interview that I could," Lopez said. "I slept in her bed at home. I talked to the whole family. I spent time with them. It can be melancholy and beautiful at the same time."

E! News previously reported that Lopez even moved in with Suzette Quintanilla, Selena's older sister, in preparation as well. "It was a beautiful time in my life and it taught me so much about life," she said. "Life is fragile."

Playing Quintanilla didn't just shape Lopez's music career, it also taught her valuable lessons as an actor. "You have to really dig into the reality of what it really is," she said during her Beats 1 interview. "You can't just surface it… What it's about is playing the role as authentically as I can, it's just like when I was playing Selena."

This mantra applies to her newest role as a stripper in the just-announced film Hustlers, also starring Constance Wu and Cardi B (another Bronx native and huge fan of Selena's). "I was so in it when I was playing Selena back then," Lopez continued. "I feel the same way about playing [Ramona]. I'm going to play this persona, and do it in the best way that I know how." She added, "I'm going to learn everything about that life and that mentality that I can to play it as authentically as I can."

If Lopez plays Ramona half as authentically as she played Selena Quintanilla, then Hustlers will definitely be worth seeing.