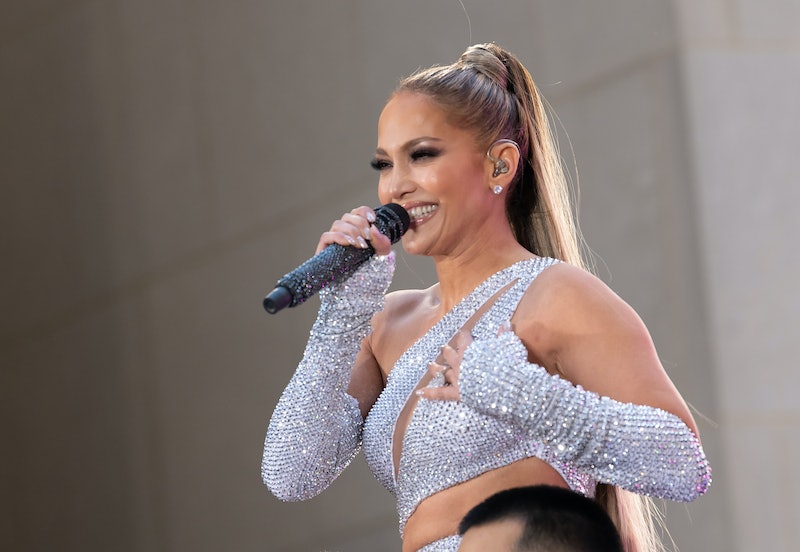 File this under unexpected, but exciting news: On Thursday, Sept. 26, Pepsi announced that Shakira and Jennifer Lopez will headline the Superbowl halftime show. Shakira shared the announcement with a tweet that features her rocking a Pepsi ring, while the official Pepsi account tweeted out an image of both singers, accompanied by the caption: "Two 👑 👑 First time together on stage…on the world’s biggest stage. Welcome @JLo and @shakira to #PepsiHalftime #SBLIV @RocNation @NFL." The soda company is the official sponsor of the halftime show). Shakira's photo is captioned simply, 02.02.20, and Lopez tweeted the news with the same caption, as well.

Per Billboard, Super Bowl LIV will take place in Miami at the Hard Rock Stadium. Earlier this month, rumors that Lopez would headline the 2020 halftime show began circulating, but the Hustlers star has been hinting at the possibility since the summer. In a July interview with Entertainment Tonight, she commented on possibly performing at the halftime show. "Yeah, we've thought about the Super Bowl and it's in Miami, it's a big deal but we'll see," Lopez said. "They make their own decisions over there."

According to CBS Sports, Lopez and Shakira have strong ties to Miami. Lopez's fiancé Alex Rodriguez has a home in Coral Gables, and the "Jenny from the Block" singer has filmed several music videos in Miami. The city even declared July 24 (Lopez's birthday), "Jennifer Lopez Day" earlier this year. Meanwhile, Shakira also owns property in the city, and has lived there on and off for years.

Per Pepsi's official press release, the halftime show will be the first time these two talented singers have performed together. In a statement via Pepsi, Shakira said, "I'm so honored to be taking on one of the world’s biggest stages in the company of a fellow female artist to represent Latinos and Latinas from the U.S. and all over the world — and to top it off, on my birthday! This is a true American dream and we are going to bring the show of a lifetime!"

Lopez added, "Ever since I saw Diana Ross fly off into the sky at the Halftime Show, I dreamed of performing at the Super Bowl. And now it's made even more special not only because it’s the NFL’s 100th anniversary, but also because I am performing with a fellow Latina. I can't wait to show what us girls can do on the world's biggest stage."

Only two Latinx performers have previously played the halftime show — Gloria Estefan and Enrique Iglesias. Given that Miami has a large Latinx population, it's even more fitting that Lopez and Shakira will be taking to the stage on Feb. 2, when the Super Bowl airs on Fox. They are the perfect artists to represent the city of Miami — thanks in part to their major crossover hits on the pop and Latin charts.

Lopez and Shakira will soon be joining the ranks of previous halftime performers like Lady Gaga, Beyoncé, and Madonna. Together, these two gifted artists are prepared to make Super Bowl history, and they'll likely put on an incredible show in the process.

More like this
Jennifer Lopez Shares Rare Holiday Photos Of Ben Affleck & Her Twins
By Radhika Menon
J. Lo Just Announced A New Album — And Ben Affleck Inspired At Least 1 Song
By Stephanie Topacio Long
Adele Freaks Out After A Fan Used A Filter On Their Selfie At Her Show
By Radhika Menon
Billie Eilish Has An Exciting Relationship Update About Her Boyfriend
By Grace Wehniainen
Get Even More From Bustle — Sign Up For The Newsletter