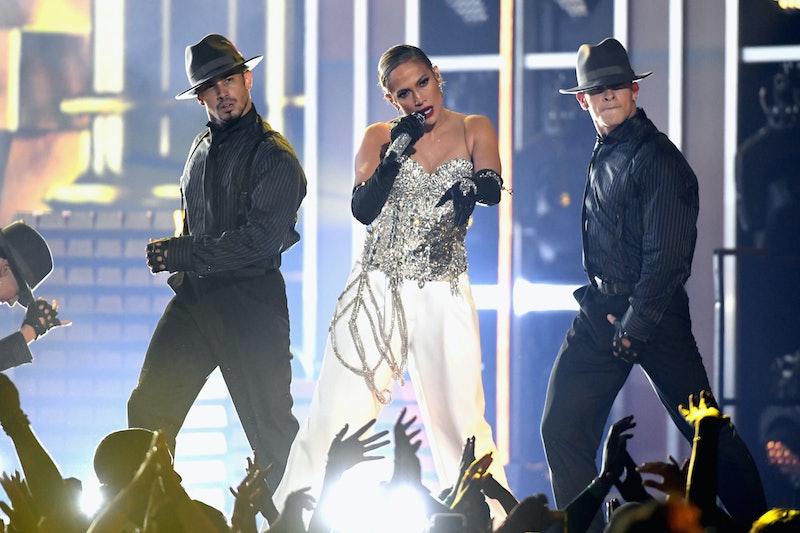 The 2018 MTV Video Music Awards is shaping up to be an exciting night. That's no surprise considering that MTV's annual awards show is known for breaking boundaries, what with the infamous Madonna, Britney Spears, and Christina Aguilera kiss in 2003, and the time Kanye West interrupted Taylor Swift's speech in 2009. The VMAs have hosted some of pop culture's most exciting, and surprising, moments, and this year it will do the same when Jennifer Lopez receives the Vanguard Award at the 2018 VMAs on Aug. 20. Considering that J. Lo will be the first Latinx recipient of MTV's Vanguard Award, the 49 year-old triple threat is breaking a new kind of barrier at the VMAs already.

The Vanguard Award's official name is the Michael Jackson Video Vanguard Award, and Lopez will be in good company among past recipients. The "Get Right" singer will join icons like Madonna, The Rolling Stones, Michael Jackson, and Pink as one of the Vanguard winners. The Vanguard Award, which only became titled to honor Jackson in 1991, has been awarded to 31 artists since its 1984 inception, and Lopez will be only the seventh woman ever to receive it. It's hard to believe that after so many years, so few women have received MTV's Vanguard award — never mind the fact that no other Latinx artists have received it — and Lopez is the perfect person to serve as a trailblazer. After all, she's been doing it throughout the 30 years of her career as a dancer, singer, and actor.

It's obvious why J. Lo is so deserving of the award, but really, it's a gift to everyone, since the "Dinero" singer will also perform at the show, which will air live on Aug. 20 on MTV. According to a press release, J. Lo hasn't performed at the VMAs since 2001, but she'll end her absence from the VMA stage this year, and her performance is sure to be electric. The singer is also nominated for two awards with her single, "Dinero," which features Cardi B and celebrates Lopez's Puerto Rican heritage. "Soy la Princesa, San Juan, Puerto Rico / They say money talk, but my talking bilingual," J. Lo sings in the new song.

One of the aspects of J. Lo that makes her so inspiring is the way that she's always embraced her multiculturalism, ever since the start of her career when she starred as Selena Quintanilla-Pérez in the 1997 biopic, Selena. After filming that movie, Lopez recorded her first studio album, On the 6, which included songs in Spanish.

More recently, Lopez has contributed the relief efforts in Puerto Rico following Hurricane Maria's devastation. "We just want to be treated equally. We're Americans. We're here to kind of shine a light," Lopez told ABC News. According to a press release, MTV's Vanguard Award recognizes J. Lo's entire legacy, including her humanitarianism. The release said, "Lopez is one of the most iconic and influential multi-hyphenates across music, film, television, fashion, business and philanthropy."

If anyone deserves MTV's 2018 Vanguard Award, it's J. Lo, and it's likely that she'll put on a show at the Video Music Awards that fans won't easily forget. The Bronx-born star seems to be at the height of her career now, but she still probably has a lot more in store for everyone.