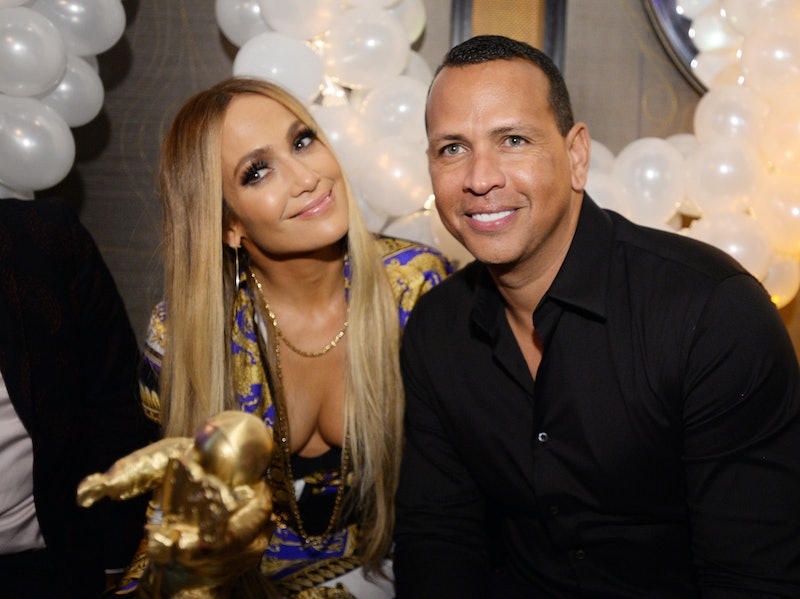 It's been a party-packed week for one of Hollywood's most famous couples. Just a few days after J.Lo's 50th birthday blow-out, A.Rod celebrated his 44th with another big bash of his own. The icing on the cake, though, was Jennifer Lopez's on-air birthday surprise for Alex Rodriguez during MLB Tonight, as Us Weekly reported. Rodriguez's two daughters tagged along as well, and capped off all the festivities in a super sweet way.

It's legitimately impressive that Lopez and Rodriguez are still standing after all the partying they've done over the course of the last week. First, they celebrated Lopez's 50th birthday on July 24 with a star-studded soiree at Gloria and Emilio Estefan’s estate in Miami. It was a pretty epic affair, and included a caviar bar, drinks, dinner, dancing, fireworks, and a medley of her biggest hits, performed by her "It's My Party" tour dancers.

Two days later, they threw down in Miami yet again for Rodriguez's 44th. According to People, there was even more eating, drinking, and dancing at the former baseball star's shindig, and the whole place was fully decked out with New York Yankees-themed decorations.

Finally, on July 28, Lopez brought a cake and Rodriguez's two daughters — Natasha, 14, and Ella, 11 — to surprise A.Rod at work. The athlete was co-hosting MLB Tonight at the time, and ESPN captured the moment in a clip posted on Twitter.

In the clip, Rodriguez and his co-hosts, Jessica Mendoza and Matt Vasgersian, were going about their business as usual during the New York Yankees vs. Boston Red Sox game. Then, seemingly out of nowhere, out pops J.Lo from behind a curtain. Rodriguez had his back turned to the curtains, though, so he didn't see her at first. It wasn't until Lopez squeezed his shoulders and his daughters came in from the side that he realized what was going on.

Rodriguez looked genuinely surprised by his visitors, and immediately started grinning from ear-to-ear. A band in the distance then began to play the "Happy Birthday" song, and his girls presented him with a giant cake. "The whole summer has been one large cake," the athlete joked.

Later, he posted a few clips from the moment on his Instagram Story, which showed the surprise going down from a few different perspectives. The first clip was taken from above the broadcast booth, and shows some of the massive crowd in the stadium below. "THE PARTY CONTINUES IN THE BOOTH!!!" Rodriguez captioned the shot.

The second clip on his Instagram Story was a collage of a few snaps, seemingly taken by fans. There was one that captured him smiling with J.Lo standing behind him. There was another pic that showed even more of the crowd and field below. The third pic zeroed in on their view of home plate, and wow, what a view it was.

Lopez's birthday surprise for A.Rod on-air was the perfect, low-key way to end a seriously momentous week. Now, enjoy all that leftover cake and get some rest, you guys.