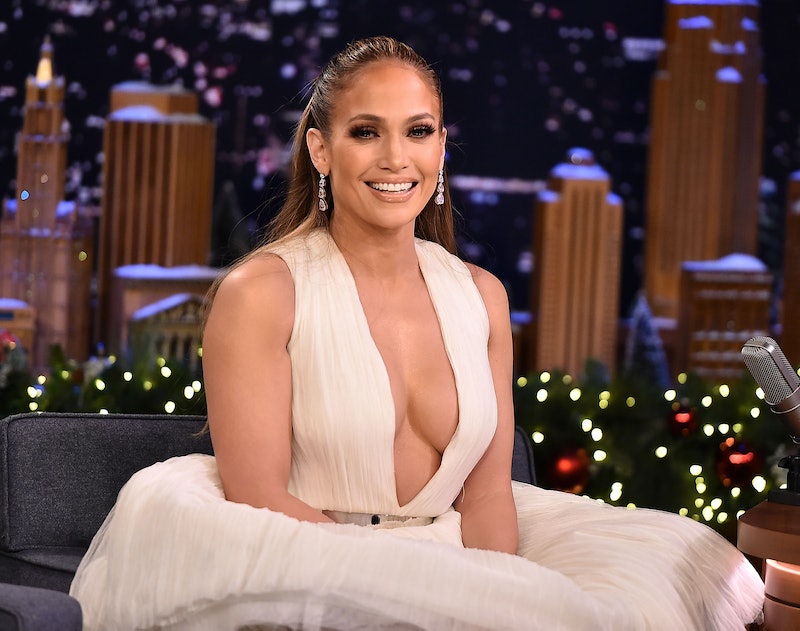 She's a multi-hyphenate businesswoman with a globally recognized name and nearly 30 years of experience in the entertainment industry. Despite her many, many accolades, though, even Jennifer Lopez still gets insecure about celebrating her successes sometimes, according to a new interview with Harper's Bazaar.

Isn't that kind of wild to hear? That J.Lo — singer, dancer, actor, designer, ever-impressive mogul of all-things — has a hard time accepting that she deserves success? In the Harper's Bazaar interview published on Jan. 9, the star opened up about how she's trying to start congratulating herself and why it took so long in the first place.

"At this point in my life, I’m trying to give myself more credit," Lopez said. "It’s hard when people are always telling you that you’re not good at things or saying, 'Why is she successful?' You get a lot of that when you’re a successful woman. You don’t get that as much when you’re a man."

Wait. *Record scratch* Hang on a minute, back it up. People have been telling Jennifer Lopez — the Jennifer Lopez, aka Jenny from the Block. aka J.Lo, aka a queen that walks amongst us — that she's not good at things? Who are these people? And what have they been telling her she's not good at? Grab your pitchforks, guys. Let's angry mob these naysayers. Just kidding. Kind of.

Lopez then went on to say something that may resonate with fans for a few different reasons. You know how on the press tour for her movie A Star Is Born, Lady Gaga repeatedly praised Bradley Cooper by using the same metaphor about their working relationship over and over again?

"There can be 100 people in the room, and 99 don't believe in you, she said on numerous occasions. "But I had this one [Cooper] incredible talent with me." It wasn't always those *exact* same words, but you get the gist: Believe in yourself and all you need is for one other person to believe in you for you to eventually succeed.

Well, what Lopez told Harper's harkened a similar sentiment in regards to the effects of group mentality — or lack thereof. The 49-year-old conveyed the more widely relatable side of the coin, admitting to the publication,

"The thing about people, women especially, is that you can have 12 people telling you you’re amazing, but that one person kind of putting you down, that’s the voice that sticks in your head."

So true, right? It can be really hard to shake that *one* criticism, even if you're swimming in a sea of compliments otherwise. It's almost like, the flip-side of what Gaga said. "I think sometimes people try to make you feel like you’re a fraud," Lopez continued to explain. "And maybe you’re afraid you’re one too. Then finally you go ... 'This is not a mistake. I worked hard to be here.'"