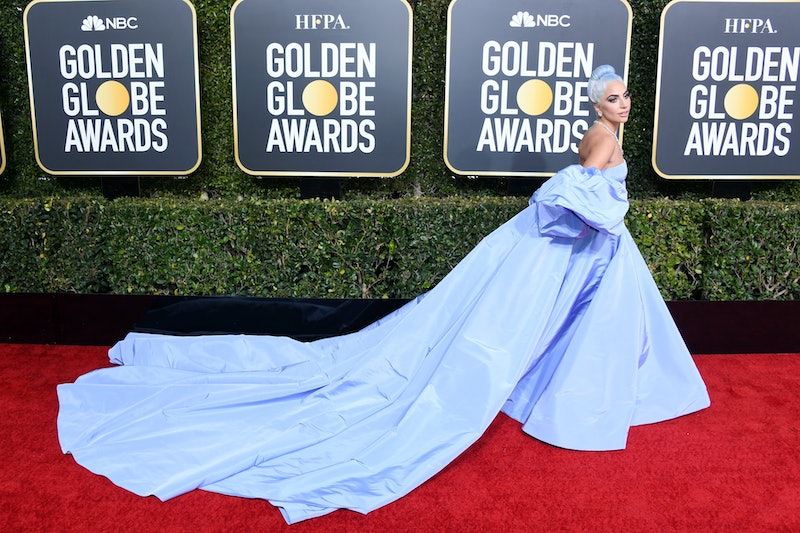 Kickstarting award seasons isn't easy, but Golden Globes hosts Sandra Oh and Andy Samberg based their opening monologue on one thing: kindness. There was no roasting and no biting jokes. Instead, they riffed on how hot Michael B. Jordan is, how talented Amy Adams is, and why TV nominee Jim Carrey wasn’t allowed to sit with the movie people in the front of the theater. They couldn’t help but poke fun at one of the most recognizable canned bites of award seasons thus far — the adage that, in a room of 100 people, you only need one to believe in you.

It may not sound particularly notable, but the joke is that, during her “for your consideration” run leading up to this awards season, Lady Gaga said that about her A Star Is Born co-star Bradley Cooper, uh, a million times. She said over and over again that if there are 100 people in the room, and 99 don't believe in you, all you need is one person to believe in you. The numbers don’t lie. For her, that person was Bradley Cooper, who took a chance on a woman who hadn’t led a movie before and gave her the lead in A Star Is Born. There’s even a supercut of Lady Gaga saying these words. Seriously.

It's understandable that Lady Gaga would lean on saying virtually the same thing over and over again. This is her first huge role, she clearly has affection for Cooper, and it has to be absolutely mind-numbing to answer the same questions hour after hour, day after day, and make them sound fresh and interesting.

Soon, the "100 people in a room" bit became bigger than Gaga — Jonah Hill told GQ Live that using the same talking point over and over again was actually Lady Gaga using her craft. "When [the meme] was going around, I think it was from a place of mean intent,” he said. “But I thought to myself, 'Damn, she really is an incredible actor.' She’s delivering those same talking points every night and making them sound new. That’s acting.”

As to where it came from, Lady Gaga told ELLE that it's a riff on something her vocal coach Don Lawrence used to say to her. “I was taking meetings with entertainment attorneys and knocking on people’s doors, trying to get them to listen to demos that I made on a four-track Tascam cassette player," she said, "and [Lawrence] said to me, ‘There can be a hundred people in the room, and 99 of them won’t believe in you, but all you need is one.’”

Imitation is the most sincere form of flattery, and Lady Gaga seemed to realize that — she laughed along with Oh and Samberg when they were doing their version of their bit. It's not like Gaga has been shy about wearing a meat dress or bubbles or changing her whole branding with every album, so being playfully poked fun at is nothing — by two people or 100.