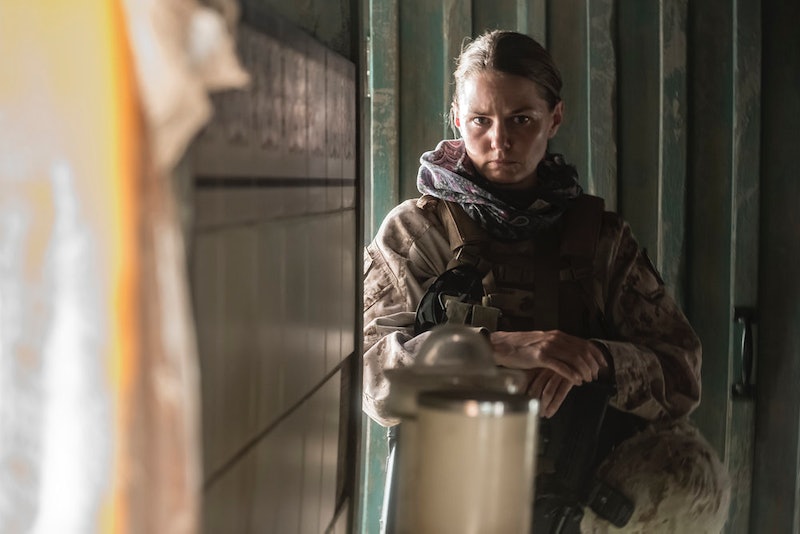 Among the three new characters who have been introduced on Season 4 of This Is Us, Cassidy's story is currently the most open-ended. That means she could reappear on screen as little as one time, or as many as every episode that remains. And until a clear timeline is established, fans have a theory about her character that could keep her around for a while.

Fans think she could be Kevin's future wife. In a Season 3 flash-forward, he has a young son who he presumably had with his unnamed wife. Although Cassidy has a husband right now, things are tense between them, and she may end up moving on for good.

The last time Cassidy was on screen, she had an encounter with Kevin's Uncle Nicky, who drunkenly threw a chair through the window of her veterans support meeting in their shared hometown. After being arrested for his behavior, Nicky called Kevin for help, which could ultimately lead to him and Cassidy crossing paths and becoming friends.

If that does happen, Cassidy could become a series regular soon, and the actor who plays her, Jennifer Morrison, is more than happy about it. She has been quite vocal on social media about joining the This Is Us family and has shared a bunch of behind-the-scenes insight about her preparation for the job.

According to one of her Instagram posts, she re-watched all three seasons, read several war memoirs, dyed her hair, and got in military shape upon learning that she got the part. That has to mean the role is major, right?

During the Sept. 24 season premiere, she live tweeted the show with the hashtag #askjen and answered questions from fans. In one of them, she said her friends and family have never been more excited about a role of hers, which is a bold statement considering she's also been on shows like House, How I Met Your Mother, and Once Upon a Time.

She also told fans that her work with the This Is Us creators and crew has been "one of the best creative experiences" she's ever had. If given the opportunity, she'd likely find a way to stick around for as long as possible.

In an interview with The Hollywood Reporter, creator Dan Fogelman said that Cassidy is "a huge part" of Season 4 and "she wasn't put in this episode to just be somebody who happened to be in a room when the chair went through a window." He added, "She's going to play a big part, clearly, in Kevin's story moving forward and obviously Nicky's," but he seemed to put more emphasis on Kevin. "I think it goes in a funny direction, in a weird direction and occasionally dark direction that I think will be exciting for people," he said. "Especially in relationship to Kevin."

He also said that where the story goes is "many, many episodes ahead," which implies that Morrison has a place in some flash-forward scenes to come. How many episodes she'll show up in between now and then remains a mystery, for now.

More like this
Jennifer Aniston Is Still Wearing That 'Friends' Dress She Stole From Monica's Closet
By Jake Viswanath
Everything You Need To Remember Before Westworld Season 4
By Brad Witter
Julie Andrews Revealed A Surprising Behind-The-Scenes 'Bridgerton' Detail
By Grace Wehniainen
Who Is 'Umbrella Academy' Star Elliot Page Dating After His Divorce?
By Jake Viswanath
Get Even More From Bustle — Sign Up For The Newsletter