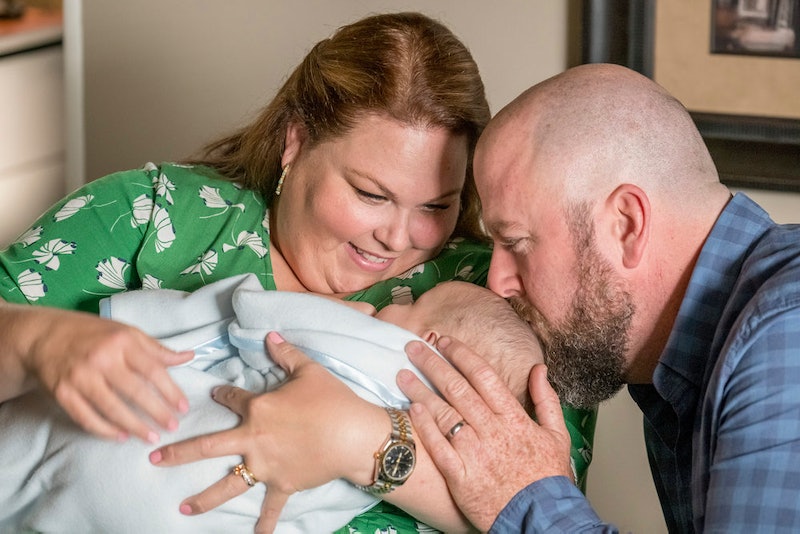 The end of the premiere revealed that Toby and Kate’s son, Jack Damon, becomes a talented and successful musician in the future (he's also blind). But the episode failed to really explain the Pearson's connection to other new characters, Jennifer Morrison’s Cassidy Sharp and Asante Blackk’s Malik. Cassidy is an veteran suffering from PTSD, though she doesn't want to admit it. Struggling to adjust to civilian life, she reaches a breaking point when she loses her temper and hits her son. Meanwhile, Malik is a teen dad, raising his young baby daughter with the help of his parents, who meets Deja at a barbecue.

Plus, Nicky Pearson is also back in the picture and fans are eager to find out how he's going to become more connected to the Pearson family this season. And these Season 4 This Is Us theories based on the premiere are just beginning to try and answer these key questions.

1. Is Cassidy The Mom Of Kevin's Son?

Even before this season's premiere, fans started speculating that Morrison's character, Cassidy, would be a love interest for Kevin and ultimately have his child, the boy who was shown in the future timeline during the Season 3 finale. Well, the Season 4 premiere didn't make it known if Cassidy and Kevin will be involved romantically at some point. First of all, Cassidy is currently married to Ryan (played by Revenge's Nick Wechsler) and they have a son, Matty. But, as she revealed at the veterans support meeting she attended, she and Ryan are separated. And the premiere set up a future meeting between Cassidy and Kevin after Nicky (Griffin Dunne) got arrested at her veteran's meeting and called Kevin to bail him out.

Executive producer Dan Fogelman hinted that the two would form some kind of relationship, telling Entertainment Weekly, "I can’t say too much about it other than the relationship is complicated, it’s formative, and it’s a very deep, interesting, bizarre relationship. And whether or not it’s ever romantic is for the series to delve into a little bit later on." It seems fitting for Cassidy and Kevin to get together, especially since Nicky's ordeal will probably put them in one another's crosshairs.

There's a good chance that Cassidy and Nicky will form a connection — the premiere ended with Cassidy giving Nicky a significant look of understanding that seemed to hint at a budding relationship or bond. Some fans even seem to think Nicky could be Cassidy's dad. However, it seems more likely that Cassidy and Nicky will form a bond due over being veterans struggling to adjust to civilian life.

Adding even more evidence to this rumor, Dunne was recently upped to a This Is Us series regular for Season 4, according to Deadline, so that just might hint at how important he is to this particular season. And, in an interview with The Hollywood Reporter, Fogelman hinted that Cassidy and Nicky's relationship would be pivotal to the season. "She's going to play a big part, clearly, in Kevin's story moving forward and obviously Nicky's," he said. "Where that goes is many, many episodes ahead but it's a very interesting and it's very unusual and deep and a very important relationship for Kevin moving forward, and obviously for Nicky as well."

There is one popular theory going around speculating that Deja is actually the mom of Malik's child. Now, some might be wondering how this could be when Deja seemingly met Malik at his friend's barbecue, after he was shown at home with his baby girl. In response to a question about the timeline, @estefanyv_96 tweeted that it's still possible that Malik meeting Deja was actually a flashback from Malik's present, which is when he has a child.

But, if Deja is the mom, don't you think she, Randall, and Beth would all be involved in the child's life or want to have her live with them? At this point, it sure seems like Malik is raising his daughter by himself and with his parents help. All that said, based on what Fogelman also told EW, it doesn't seem like this theory is going to pan out. While discussing how Malik's family are going to eventually meet Randall and Beth, Fogelman teased that it was "one of the things I'm most excited about for our series this season" because of Malik's status as a single father. So, whoever is the mother of Malik's child, it's probably not Deja.

4. Who Is Rebecca's Sister?

Many fans are wondering about Rebecca's sister following the premiere. Though she didn't appear in the episode, Rebecca's dad (played by Tim Matheson) mentioned her sister briefly. This seems to be the first time Rebecca's sibling has been mentioned since Season 1, Episode 8, "Pilgrim Rick." Who is she? What's her name? What does she do? These questions remain. Maybe this reference is a hint that fans are about to find out.

With every This Is Us episode, new theories form. Who knows what fans will come up with as the season continues, but there's no doubt the series keeps viewers on their toes.