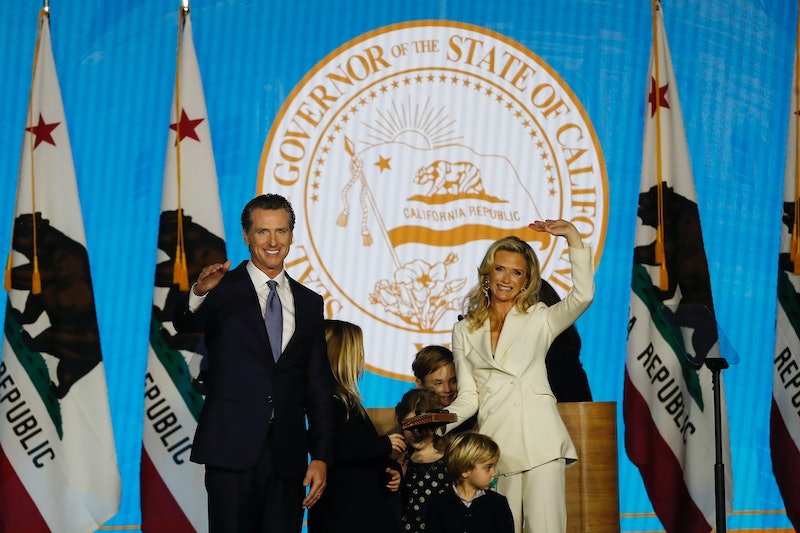 California often leads the way in terms of progressive policies, and a recent move from the governor's mansion proves that the state's position probably won't change anytime soon. In a decision meant to promote gender equality, the new California governor's wife declared herself a "first partner" rather than a "first lady."

The move isn't all that surprising coming from Siebel Newsom. As The Hill notes, she's a documentary filmmaker, and many of her films deal with gender roles and women's rights. For example, her 2011 film Miss Representation dealt with what American women in positions of power face and how the media tends to portray them. Another, 2015's The Mask You Live In, addresses the harmful effects of society's definition of masculinity on men and boys. She's been involved in media as an actress, director, and producer, and according to her IMDB bio, advocating for women and girls is a big part of her work.

The California first partner's office hasn't outright explained the choice to go with that title, as KTVU wrote. Siebel Newsom did, however, appear on a podcast in the fall, in which she said she wanted to avoid being "typecast as a trophy wife." Whatever her exact reasoning, the decision isn't just public on Twitter; her page on the governor's website also describes her as the first partner, which KTVU referred to as an "unprecedented" move.

One other important aspect of Siebel Newsom's career that her bio page on the governor's website highlights is that she founded The Representation Project, which lists its aim as "[inspiring] individuals and communities to challenge limiting gender stereotypes and shift norms." The title of "first wife" has been the norm since the United States' founding, so a governor's spouse using another title definitely counts as an effort to fulfill one of the organization's stated goals.

While Siebel Newsom seems to be the first gubernatorial spouse to go this route with her title, the question of what to call a leader's wife has certainly come up before. During the 2016 presidential campaign, there was a lot of discussion about what Bill Clinton would go by if Hillary Clinton became president. Clinton herself discussed it multiple times on the campaign trail, as ABC News reported at the time. While neither of the Clintons ever made a final decision — and of course they didn't have to, given the election results — some of the ideas Hillary entertained were "first dude," "first mate," or "first gentleman."

Now that Elizabeth Warren has declared she's running for president in 2020, the issue will certainly come up again. And since Siebel Newsom has blazed the "first partner" trail, perhaps Warren's husband — or the spouse of another female candidate — would have an easier time deciding.