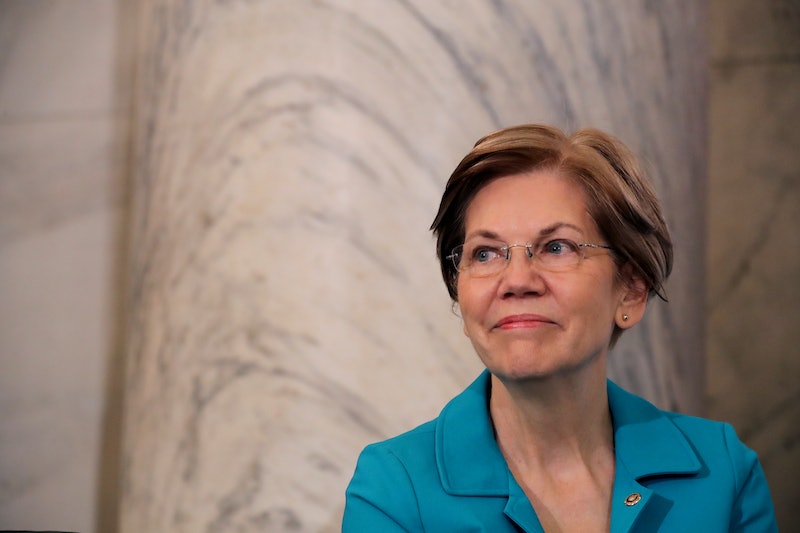 There's already been a fair amount of speculation about who might and might not throw their hats into the race for the 2020 Democratic presidential nomination, but now the first major Democratic primary candidate has made it official. Massachusetts Sen. Elizabeth Warren announced a bid for president in 2020, in a video she sent to her supporters on New Year's Eve.

Warren's email to her supporters shared the news that she had created an exploratory committee, which is a necessary first legal step towards officially declaring a run for president, as CNN explained. With the exploratory committee in place, Warren can now start fundraising for a potential presidential campaign. Getting a head start on fundraising could be very important for Warren's candidacy, because she's been quite successful with raising money in the past, as Politico reported. Because she depends almost entirely on small donations and avoids the PACs that often fund other candidates, jumping into the race early could help her significantly.

In her announcement video, Warren opened with a distinctly populist message, positioning "America’s middle class" against the "billionaires and big corporations," along with the politicians who help those groups.

“Our government is supposed to work for all of us, but instead, it has become a tool for the wealthy and well-connected,” she said in the video.

The video relies on several different themes, including Warren's background coming from a working class family in Oklahoma, her experience studying economic disparity in her academic career, and her years as an attack dog in the Senate.

“I’ve spent my career getting to the bottom of why America’s promise works for some families, but others who work just as hard slip through the cracks into disaster,” she said, referring to her pre-politics life studying bankruptcy in academia, as NBC noted. “What I’ve found is terrifying. These aren’t cracks that families are falling into, they’re traps.”

Warren's video also featured a very inclusive tone, noting the greater difficulties that minorities face in the U.S. on numerous fronts and promising to fight for everyone. As the video turned to images of various members of the Trump administration past and present, Warren talked ominously about "people who will do or say anything to hang onto power and point the finger at anyone who looks, thinks, prays, or loves differently than they do."

"This dark path doesn't have to be our future," she continued. "We can make our democracy work for all of us."

Warren certainly enters the race with far more name recognition than many other potential candidates, and an August 2018 poll from Morning Consult and Politico found that she would defeat Trump in a general election. This was before she released a DNA test that she said proved her Native American heritage, which ended up drawing criticism from both the Cherokee nation and numerous figures on the right. The announcement video didn't mention that controversy, but The Washington Post noted that it's just one reason why many potential Democratic primary voters see her as too divisive a figure to ultimately run a successful campaign for president.