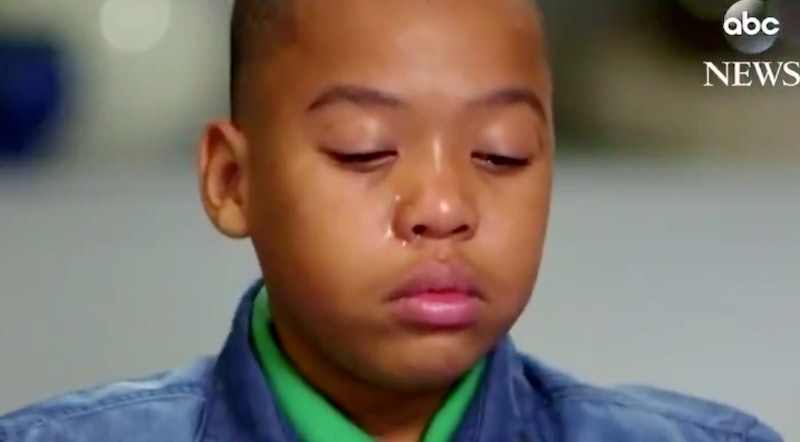 In an interview with ABC News Friday, 9-year-old Jeremiah Harvey responded to the white woman who falsely accused him of groping her at a corner store the week before. In a tearful interview with his mother Someko Bellille, Harvey said that the accusation left him feeling "humiliated," and that his mom had to explain to him at night what had happened.

“It’s still hard because lately on my mind, like, I can’t think nothing but this,” Harvey, sitting alongside Bellille, said. “I felt humiliated because of the way she was acting. I started to tear up.”

The video is one of many recent viral clips showing a white person calling the police on a black person for a non-existent offense. It depicts customer Teresa Klein, who has since been dubbed "Cornerstore Caroline," on the phone outside of a bodega in Brooklyn, telling police that "the son grabbed my ass and [Bellille] decided to yell at me."

"I want the cops here right now," Klein demands in the video. "I just was sexually assaulted by a CHILD!" Harvey, wearing a tucked in shirt and backpack, can be seen crying feet away as bystanders denounce Klein.

At several points, Klein identifies herself as a police officer. Although the NYPD later told Fox 5 that they have no record of an officer named Teresa Klein, Bellille told ABC News that Harvey was afraid after the incident that he would be taken away by the police.

"It was devastating for him," Bellille said, "because even after walking away he was pointing to, you know, patrol cars on Flatbush Avenue and saying, 'Mommy, are they here to take you away from us?'"

Another video shows Klein and other locals gathering in the corner store days later to watch surveillance footage of the incident. The footage showed that Harvey didn't touch Klein at all, but that his backpack had grazed her as he walked by.

In a later interview with Fox 5, Klein claimed that she "called 9-11 because [Bellille] was very aggressive." But Flatbush resident Jason Littlejohn, who filmed and posted the initial encounter, told ABC 7 that this isn't accurate.

Bellille told ABC News that Klein, who insisted to FOX 5 that she isn't racist, repeatedly referenced her and Harvey's race while on the phone with the cops.

“She’s on the phone and she’s saying that 'I’m a white woman,' that 'I’m standing in front of this deli,...stating that 'this black mom and her two black kids are out here' and that 'the son sexually assaulted me,'” Bellille said on Friday. “She said, 'black child, black mother and white woman.'

Klein ultimately apologized to Harvey after viewing the surveillance footage.

In 2018 alone, videos have surfaced showing white people calling the police on black people for mundane activities such as barbecuing, golfing, selling water on the street, shopping at T-Mobile, sitting in a Starbucks, swimming at pools, campaigning for reelection, talking to their child at a soccer game, babysitting white children and taking a nap.