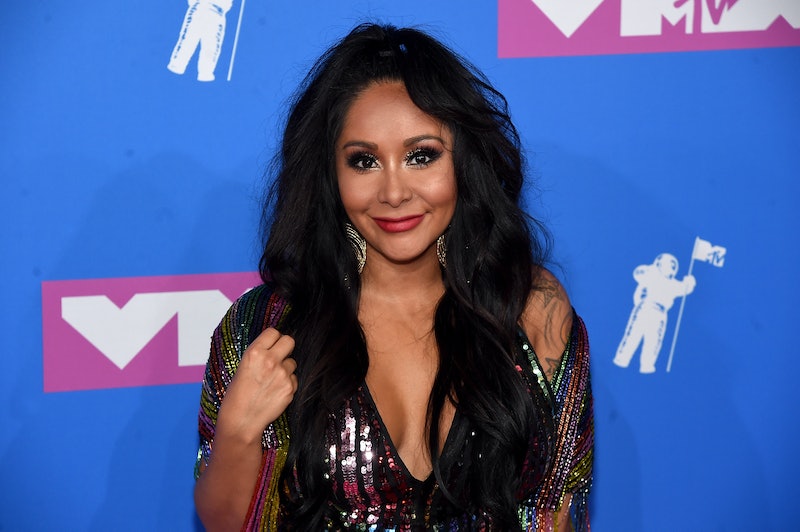 Someone is ready to be a big sister. Jersey Shore's Nicole "Snooki" Polizzi shared a photo of her daughter, Giovanna, who appears to be excited for her new sibling's arrival. Polizzi posted the super sweet up-close of her and Giovanna on Monday. Both mother and daughter are sporting matching high ponytails while the 4-year-old is wearing a pink Disney princess sweatshirt.

Polizzi captioned the selfie, "She's counting down the days until she's a big sissy! #family#mymini#happysoul." You can definitely tell why the former reality star used the hashtag my mini. The two look like twins in this adorable pic, as both anticipate the arrival of the fifth member of their family.

The Jersey Shore star announced that she and husband Jionni LaVelle were expecting their third child on November 22, 2018 with an equally precious Instagram post. "What I'm thankful for this Thanksgiving," Polizzi captioned two photos of Giovanna and big brother Lorenzo, 6, the first in color, the second black-and-white of the siblings holding a framed photo of a sonogram. In a December 15 Instagram post, Polizzi revealed she was pregnant with a son. It seems as if the months since that announcement have only made the family more excited for the new baby, Giovanna included. In fact, anyone who has been following along with Polizzi's pregnancy updates on Insta knows how excited her daughter is to have a younger sibling.

Polizzi revealed that the name of her next bundle of joy, who is due in June, will be Angelo. And apparently, Angelo is already super loved by both his big sister and big brother. She told People in March, "They tell my belly how their day was. They kiss the belly. My daughter, [when] she has food, she'll put it by my belly [to] 'feed' the baby. It's so cute."

The reality star frequently posts about how excited Giovanna is to go from little sister to big sister. (It's quite the promotion.) When scrolling through the Jersey Shore star's feed, it's easy to see how excited the toddler is. Polizzi even posted a shot in January of Giovanna with a baby stroller, standing next to a sign that read, "Big Sissy" and a sparkly pink heart. The proud mom captioned the photo, "Giovanna has been practicing being a big sister." Heart. Melting.

Other times, Giovanna sings songs to the baby. "This should make your Monday a little better," Polizzi captioned the video. "Giovanna makes up her own songs & sings to the baby every morning before preschool#iamsoblessed#proudmommy." Again, can someone die from a cuteness overload?

Giovanna and Lorenzo will probably be a big help for Polizzi when it comes to playing with the baby. As she juggles raising three kids, running her Snooki store in New Jersey, and doing various projects from Jersey Shore: Family Vacation to podcasting, it's going to be a busy 2019.

If Giovanna is this hyped about becoming a big sister before the baby's arrival, can anyone imagine her excitement level once he's here? One thing is for certain: however excited Giovanna is when she meets her baby brother, Polizzi will be sure to document it.