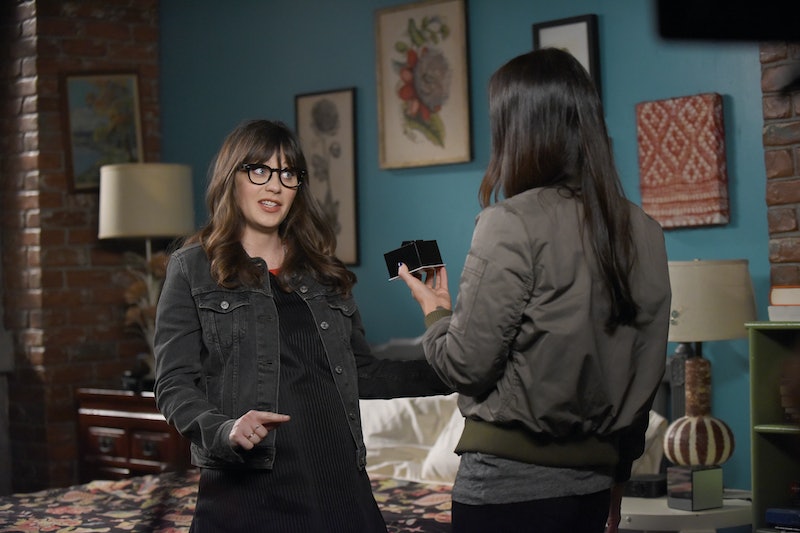 Well, it's official: We might as well call the back half of New Girl Season 6 "Nick and Jess Watch 2017." With each passing episode, I'm becoming more and more convinced that these two are finally going to get the reunion they deserve, and after what happened this week, I'm even more convinced — even if Jess is trying to distance herself from him. On Tuesday night's new episode of New Girl, "Socalyalcon VI," Nick and Jess are spending a lot of time together, and it actually leads her to realize that she needs to start putting herself first more often.

But first, something super awkward happens. Reagan's been gone on a business trip, and after CeCe points out that all the things Jess has been doing with Nick lately are super girlfriend-y, she accidentally tells him it's not fair for her to act like she's his girlfriend instead of his "good friend." She manages to explain it away to Nick, but once Reagan is back, she starts acting even weirder, per usual... especially when Reagan is totally cool about them spending so much time together.

And mostly, I love that New Girl isn't making it seem like Reagan and Jess are in competition with each other — they have feelings for the same guy, but they actually like each other, even if things do get awkward from time to time.

So that's when Jess tries to distance herself from them as a couple, but that doesn't work, either, because they end up surprising Jess with a trip to Palm Springs to go to Socalyalcon, a convention for young adult authors where Nick has a reading. Once again, she's stuck as their third wheel, and finally, she's realized that it's actually damaging to her as long as she still has those feelings for Nick.

She makes a spur of the moment decision to leave the convention, head to the airport, and fly somewhere — probably to see her dad, as she tells CeCe on the phone — so she can finally make the right decision for her. This is what they call character development, everyone, and I am so proud.

It might not look good for Nick and Jess on the surface, but if you ask me, the more Jess pulls away because of how she feels about him, the more Nick will be pushed to realize that he still feels the same way about her. It's just going to be hard to say goodbye when Reagan inevitably leaves New Girl as a result. Spinoff, anyone?