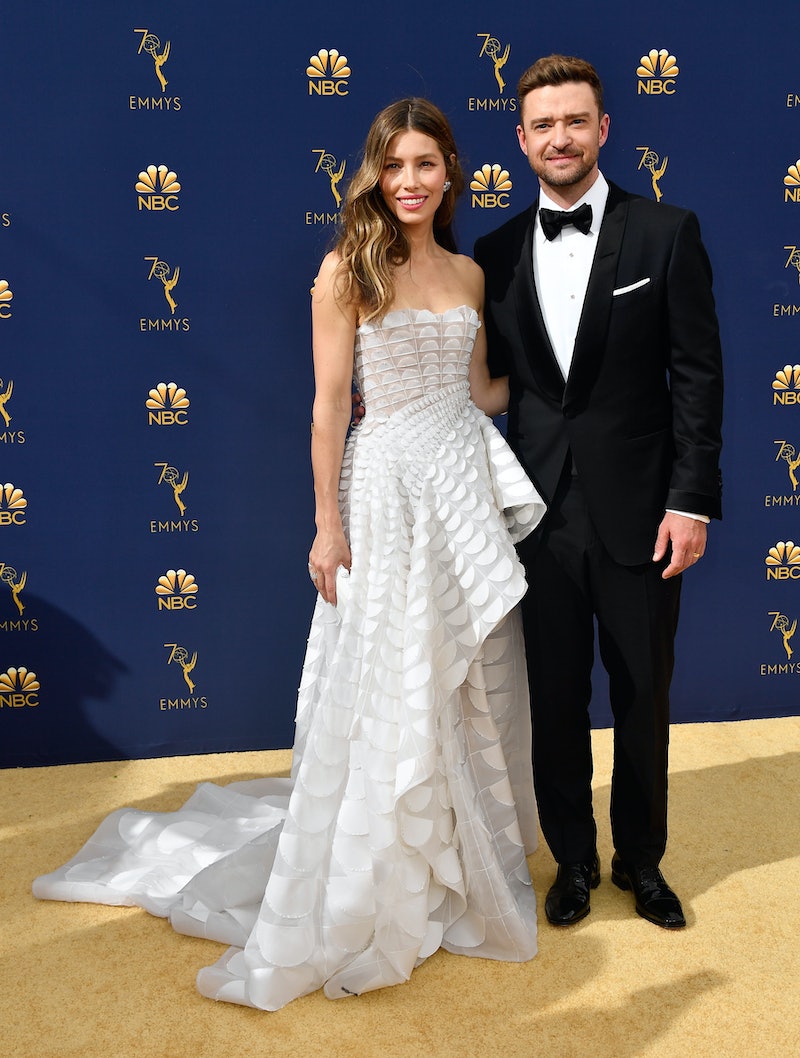 Justin Timberlake turned 38 on Thursday, and as exciting as this is for many of his fans, apparently, it was a bit of a snoozefest for his wife — but in the sweetest way possible. On Wednesday night, Timberlake shared a video of Jessica Biel asleep when they went out to celebrate his birthday. And not only is it a pretty cute moment between the two of them, but it's also pretty relatable. After all, we all know how it hard it can be when you go out past your bedtime on a weeknight.

In the video, Timberlake is riding in a car, whispering the "Happy Birthday" song to himself as he pans the camera over to Biel, who is passed out in the seat next to him. When he starts singing louder, she wakes up and laughs.

"I'm just preparing for our big night out," she explains. "Just preparing." But it doesn't seem like Timberlake is buying her story, because he then looks at the camera with a lot of doubt.

"Gotta work tomorrow for my bday so wifey really going all out tonight..." Timberlake captioned his post.

No word on where they were going or what they were doing, but hopefully, Biel was well rested when they got there.

It's hard to blame Biel for being so tired. Obviously, it was a weeknight, and presumably, she'd had to work — she's been filming Limetown, a series for Facebook Watch, in Vancouver, so that may be contributing to her exhaustion just a bit. Plus, she is the mom of 3-year-old Silas, and anyone who's ever been around a toddler knows that is no easy task. If she needed a quick power nap before spending a night out with her husband, is anyone really surprised?

Biel and Timberlake have been all about sharing the sweetest moments from their relationship on social media, but she's definitely got a lot of work to do if she wants to beat the birthday post she made for Timberlake on Instagram last year. She shared a super cute photo of the two of them cuddled up and grinning at each other, along with an even cuter caption. She wrote:

"Here's to a spectacular year ahead. I'm so proud of all you've accomplished and all that is ahead for you. plus you're a super hot dad. A ninja dad. A kiddie teeth brushing, Jedi sleep mind tricking, intimidating dad voice disciplining SUPER HOT DAD. I love you, you hot dad.. I'm here, right by your side, OG fan girl #1. Happy birthday, my beloved."

So far, Biel has yet to share her birthday wishes for Timberlake this year, but maybe she'll outdo herself? Last year's post will give her some tough competition this time around, though.

Maybe Timberlake and Biel will update us later on how the night went after her car nap. But knowing this couple, it's probably safe to assume that they had a blast together, no matter how tired they were.