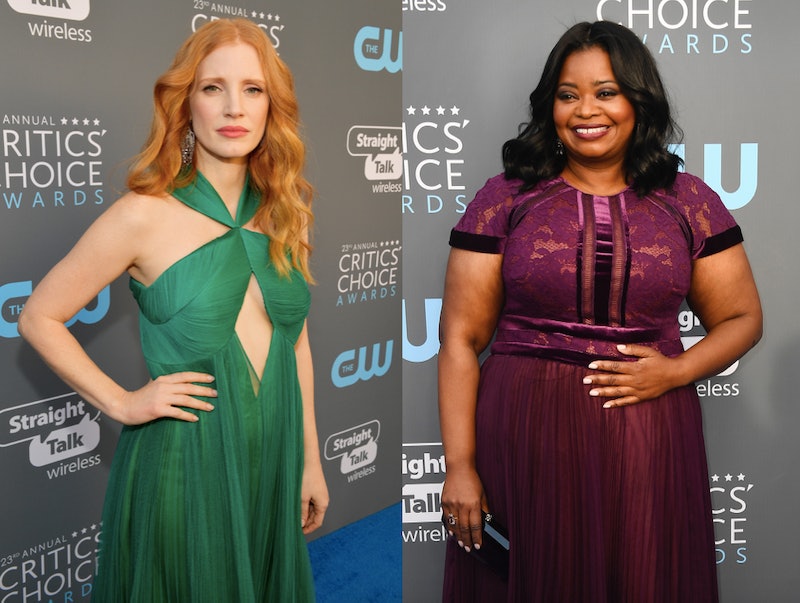 Presumably getting a jump on next year's gift-giving season, news that Jessica Chastain and Octavia Spencer are starring in a holiday comedy together could certainly prove to be the Christmas present you never knew you needed. Variety reported that former The Help costars, Chastain and Spencer, are reuniting for a new holiday comedy about “two women fighting the elements to make it home for Christmas.” And though details about the project's release date and plot remain largely scarce, it seems safe to say that this film is going to be a must-see for all.

Slated as a comedy, the forthcoming film will likely be a huge departure from the heavy narrative of 2011's The Help's storyline, showcasing the actors in a genre worlds apart from the Oscar nominated film. For their respective roles in The Help, both Chastain and Spencer each gained an Academy Award nomination for Best Supporting Actress with the latter taking home the coveted trophy. They have since continued to make huge strides in their careers not only as entertainers — but as philanthropists and champions for equality and diversity in Hollywood.

Throughout the years, Spencer has notably remained a powerful voice amidst the advocacy of diversity in film. Speaking to Deadline in February 2017, Spencer detailed her thoughts on the underrepresentation of minorities in film overall:

"I mean, when I look at the people that are underrepresented in the film industry, I’ve got to tell you, if I look down a list of characters on a film, and it doesn’t have gay, African-American or Latin characters, I’m probably not going to spend my money on the ticket."

Explaining, that unity is key when it comes to creating change, Spencer continued, "And when we stop supporting things with our dollars that don’t represent all of us, then you’ll see an explosion of diversity. Art is about reaching people that you wouldn’t normally reach. It’s about bringing us together."

A large force in the world of advocacy, Chastain has also consistently spoken out, and often tweeted about of the lack of diversity in both film and television — particularly when it comes to the topic of female-led roles.

Amidst her acceptance speech for the Critics’ Choice Award for 2014 MVP in 2015, Chastain stood before her Hollywood peers to make a plea for diversity: “Today is Martin Luther King Jr.’s birthday. It got me thinking about our need to build the strength of diversity in our industry,” she said.

In an attempt to create a better future for those being marginalized, she openly asked that others in the industry to use their voices to fight for inclusivity as she continued:

“To stand together against homophobic, sexist, misogynistic, anti-Semitic and racist agendas. I’m an optimist and I can’t help but feel hopeful about the future of film — especially looking at all the beautiful people in this room. Martin Luther King Jr. said, ‘Our lives begin to end the day we become silent about things that matter.’ I would like to encourage everyone in this room to please speak up.”

If nothing else, this premise for the forthcoming film certainly makes it clear that Chastain is taking action to become a more integral part of the change she'd like to see in the industry, as she's set out to create a cinematic product that will showcase a storyline centered around two women, who will likely be from varied backgrounds.

The yet to be titled movie, whose original treatment was co-written by Chastain alongside Kelly Carmichael, will also be spearheaded by women, as its being honed by Chastain's Freckle Films with Carmichael, Celine Rattray, and Trudie Styler all slated to produce, according to Variety. Universal reportedly beat out Fox and Paramount for the pitch, following a huge bidding war for the film's distribution.

Back on film together for the first time since 2011, Chastain and Spencer's new movie will certainly be the gift that keeps on giving, as it lends promise to the idea of a new norm for women and diversity in film.