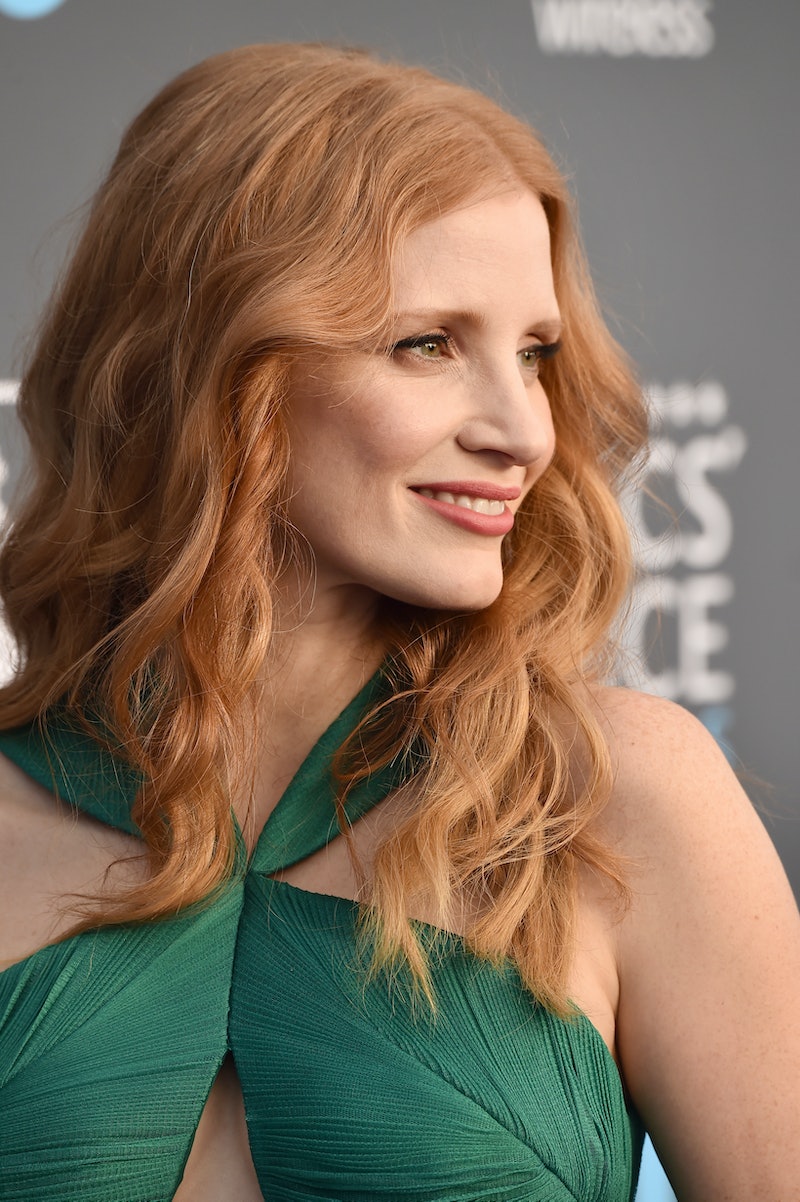 When it comes to the wheelings and dealings of sexism, misogyny, and/or female oppression, Jessica Chastain doesn't mince words. So, naturally, when asked to sum up her personal confrontations with the patriarchy, the Molly's Game star whipped out a curt response, which, for a lot of women, probably hits pretty close to home: Jessica Chastain says her experience with the patriarchy is "every experience."

In a profile with the Wall Street Journal published Jan. 17, Chastain chronicled a lifetime's worth of encounters with the long-held tenets of the patriarchy. And, in keeping with her characteristically forthright tenor (especially when she's talking about women's rights), Chastain's response to WSJ's inquiry about her "personal experience of patriarchy" was spot-on.

After flashing what the WSJ called a "small, mirthless smile," Chastain replied,

"I mean, it's every experience for me, so I don't know how to separate anything. When you have one demographic that is in charge of another demographic's livelihood, you're always going to have abuse of power."

Chastain's response feels particularly timely, for two reasons: one, it calls upon the primary thematic workings of Molly's Game, the award-season contender by first-time director Aaron Sorkin, in which Chastain plays the title character; and two, it manages to succinctly capture the patriarchy's omnipresent and overwhelming impact on women. And, while Molly's Game has already been lauded for the ways in which it manages to turn the pillars of traditional gender dynamics on their heads (mostly by way of its searing, dauntless hero, Molly Bloom, who is as tenacious in real-life as her character reads on-screen), that second point bears great real-world relevance.

In light of Hollywood's string of high-profile sexual assault allegations over the last several months, as well as the burgeoning national conversation about female oppression (and empowerment) that rose with it, it's necessary and important to honestly call out institutional sexism for what it is: pervasive, rampant, and abusive, even part of the most mundane of everyday experiences.

During her WSJ interview, Chastain also touched on those life experiences that shaped the way she sees the world and her place in it today. The 40-year-old actor — whose performance in Molly's Game has already earned her a Golden Globe nomination — recounted a physical confrontation, which she referred to as a "turning point in [her] life." During an argument over something trivial ("my room was messy or whatever," Chastain recalled), she claims her mother's boyfriend at the time slapped her. And, in return, Chastain says she kicked him in the genitals before promptly booking it out of the house.

"I always look back on that moment as knowing that, OK, if anything happens to me, I'm capable of fighting back," Chastain said, adding that her knee-jerk retaliation seemed to get the "don't mess with me" message across. "He never messed with me again," she continued, segueing into another tidbit of hard-earned wisdom: "If you allow a bully to intimidate or victimize you, they'll continue to do it. Bullies are actually weak; they don't go after strong people."

As she told the Wall Street Journal, at the end of the day, her path toward independence (and autonomy from the men who've oppressed her) pretty much boils down to this: Women shouldn't be defined by men. Seems simple enough, right? Unfortunately, that's not how gender dynamics have historically played out. But, in taking steps toward eventually changing the ways in which women experience sexism in a day-to-day sense, perhaps the societal powers that be might do well to take a note from Chastain's insights.