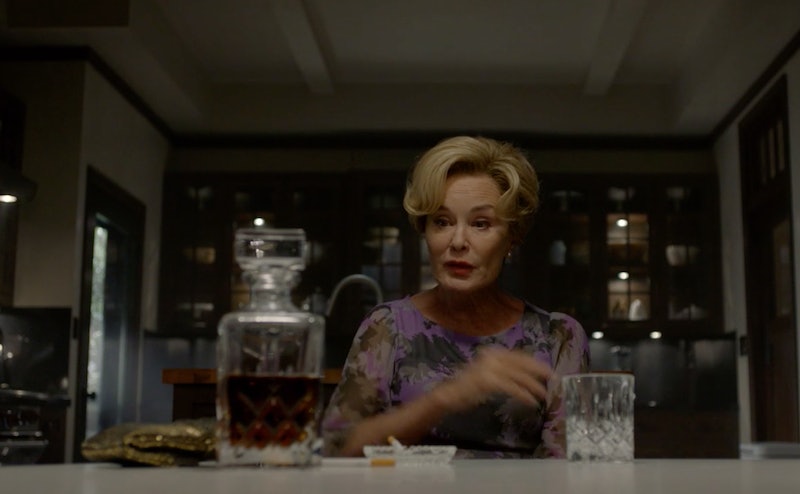 "This is my f*cking house," the incomparable Jessica Lange, playing her Murder House character Constance Langdon, sneered during the first moments of her return to American Horror Story on Wednesday night. She might as well have said, "this is my f*cking show," because her guest appearance reminded everyone how much she's been missed throughout her three-year absence. But while Jessica Lange's AHS: Apocalypse appearance was brief — it's the only episode she'll appear in this season — it did confirm a major fan theory.

Though Constance was one of the very few characters to make it out of Murder House alive, it didn't stay that way for long. Episode 6 revealed that Constance is indeed dead, and has become one of the numerous ghosts destined to haunt the halls of Murder House for eternity. Fans began to speculate about her fate earlier this season, after it was revealed that Michael Langdon, her grandson and almost certainly the anti-christ, spent most of his formative years with a satanist named Mead (Kathy Bates) ready and willing to do his bidding. When we last saw Michael as a boy, he was being raised by Constance, so many viewers assumed that something must have happened to separate the pair — especially considering it seemed like she would do just about anything for him, no matter how evil his actions.

In Episode 6, Constance finally fills in the blanks. After requesting that Madison Montgomery and Behold Chablis remove Moira from the house, Constance recounts her experiences with Michael. She explains that she tried her best to raise her grandson, but knew right away that something about him was off. She first noticed when she found dead flies with their wings pulled off in his crib. Then, he graduated to impaling rodents and leaving them around the house, ostensibly as a display of love for his grandmother. Constance says at this point she assumed she was dealing with "a garden-variety serial killer," but no matter. She was born to raise monsters, she tells her guests.

In an effort to "make lemonade out of lemons," as she describes it, Constance buried each animal Michael killed underneath a rosebush in her backyard. Pretty soon, the whole lawn was stuffed to the brim with said roses — that's how often he killed. As we saw in Murder House, Michael eventually moved onto humans and murdered his nanny, and after that, something very mysterious happened. One morning, when Constance went to wake him for school, she found that he had aged ten years overnight. "It was almost as if he was in a hurry to get somewhere, age-wise," she says. That's when Constance began to realize that even she, self-proclaimed mother of monsters, might not be the right fit to raise Michael.

As he grew older, Michael also grew more out of control. One night, Constance awoke to find her grandson with his hands around her neck, choking her and threatening, "you don't tell me what to do anymore." After Michael killed a priest Constance asked over to help him, she began to accept that her days as a mother "were coming to an end." Knowing that her grandson would inevitably kill her someday, Constance decided to take matters into her own hands. "I have always lived my life on my own terms," she tells Madison and Behold, adding that she didn't want to give any man the satisfaction of watching her die. So, she went to the Murder House, where she could be with three of her four children, and committed suicide.

What's interesting about Michael is that he doesn't seem to be fully without remorse. When he first started to strangle Constance, he apologized, crying, seeming to not know what had come over him. And after he discovered that his grandmother was dead — and, even worse, that her spirit had hidden itself from him — he appeared to be genuinely distraught. Is this whiff of a conscience enough to hope that he could be stopped? Constance didn't seem to think so. And if she has given up hope on Michael, he may be a lost cause.