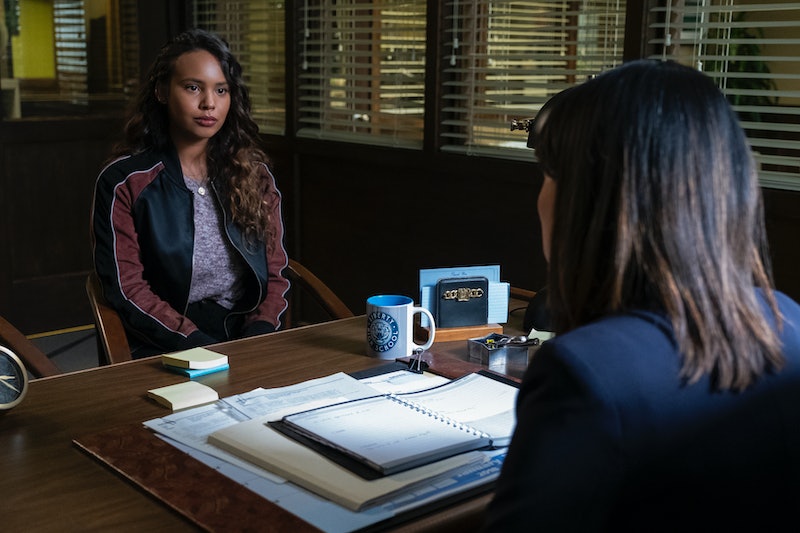 The effects of sexual trauma linger. They infiltrate everyday interactions, impact future relationships, and change one's relationship with one’s body. Navigating the healing process is difficult for anyone, but especially so for a young person who is just beginning to find themselves. Throughout the last three seasons of Netflix’s 13 Reasons Why, we've watched Jessica Davis (Alisha Boe) grapple with her sexual assault and all the trials and tribulations that accompany her healing process. In Season 3, Jessica takes a significant step forward in her healing, and begins to reclaim her voice with a newfound passion for activism.

“It is such a different side of her that people haven’t seen before,” Boe tells Bustle. “This season she is really focusing on empowering herself but also empowering people around her.”

Jessica is now the student body president; she commands crowds and fearlessly calls out the misogynistic culture that protects abusers like Bryce Walker. We see a maturity in Jessica this season that's striking after bearing witness to her struggles the first two seasons. The show's depiction of sexual assault is undoubtably brutal and tough to stomach, in part because it is so immediately recognizable.

A party, alcohol, an acquaintance (most cases of rape are at the hands of someone you know according to RAINN) and a court proceeding without much justice to speak of are all tragically common factors in the conversation around assault. “Sexual violence, unfortunately, is a common event among high school and college aged women,” Kristen Zaleski, PhD, LCSW, and Clinical Associate Professor, Suzanne Dworak-Peck School of Social Work at USC tells Bustle.

It is in the show’s depiction of the healing process that we start to see the nuances of Jessica’s journey come to light. After sexual trauma, recovery is far from linear. There are setbacks and triggers, and no healing looks exactly the same — Jessica’s story is one among many, and this season we begin to see her come back into herself, start a sexual assault survivors club, and even get back in touch with her sexuality.

Through Season 1, we see Jessica bury what happened to her and try to keep all her emotions and worries bottled up after Hannah’s tape comes out. In Season 2, we see the details of Bryce's rape trial play out and Jessica begin to grapple with her PTSD. It is here that she begins to work through her emotional trauma, with the added burden that comes with re-living her experiences as part of the legal proceedings of pressing charges. The case closely mirrors the Brock Turner trial of 2016 (where the ex-Stanford student was sentenced to 6 months in jail by a lenient judge after he assaulted an unconscious woman). Now having testified, opened up about her assault to her friends and family and started to find herself again, Jessica finds a passion for advocacy.

“When a survivor starts to feel better, they might decide that they want to help other survivors of sexual violence,” says Zaleski, who specializes in sexual assault. “It will be part of their healing to tell their story or volunteer for an organization or give a speech at a rally, and that might be something that is really helpful.”

In the beginning of the third season, Ani describes Jessica as “someone who has power they are finally ready to use,” and watching her experience a mix of pleasure and love and pain and failure throughout the next 13 episodes, it is clear that Jessica is in a totally different place this season. “What is healing for one person may not be for another,” says Ferol E. Mennen, PhD, LCSW, Associate Professor, Suzanne Dworak-Peck School of Social Work at USC. It is important not to treat any survivor's story as an all-encompassing tale, because everyone’s journey is completely unique. Jessica’s is just one look into what healing can look like for a sexual assault survivor.

“To [watch her] own her body and not have to feel like a ghost in a shell that she felt like all of the second season — it feels really cool to see her claim her power as this sexual being,” Boe adds.

If there is anything the #MeToo movement has brought to our collective attention, it is that sexual assault affects everyone. This is a sentiment Jessica brings to the attention of the entire school during the rally, when she encourages survivors of sexual assault to stand up. As they do, we see the insidious ways in which trauma and the stigma around rape leaves many suffering in silence. Whether it is through a viral hashtag or a school assembly, we are only just now grappling with the way our society has treated survivors. But the culture is changing at Liberty High, it's changing in Hollywood, and it's changing around the country.

“It is important to note that the whole awareness of the problem of sexual abuse came from victims speaking out rather than professionals,” says Mennen. “These former victims became survivors in the process and have had an enormous positive effect on the way we understand sexual abuse and sexual assault.”

As we follow Jessica on her journey in 13 Reasons Why, her struggles shine a light onto the aftermath of sexual trauma. For those who see themselves in her story, this season offers a glimpse into what it looks like to explore sexual pleasure, find some purpose in activism, and learn to trust again. “I hope [audiences] take away [that] you are not defined by your trauma, and you don’t have to walk through life having that define you,” says Boe. “You are so much more than just your trauma.”