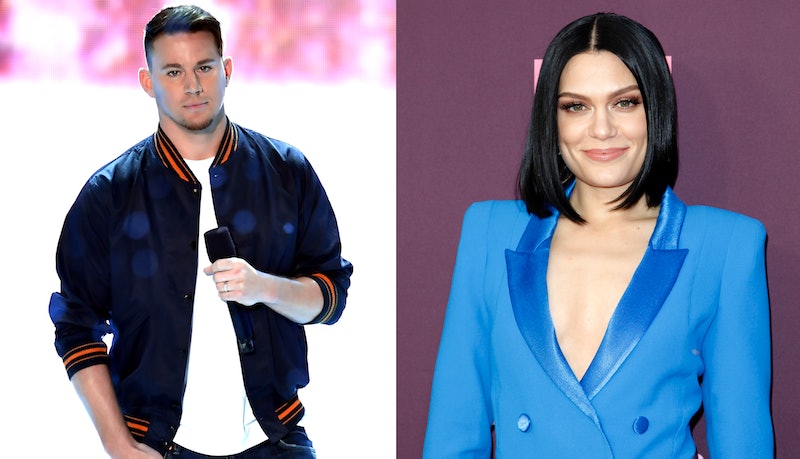 Singer Jessie J burst onto the music scene back in 2010 with the release of her smash hit debut single "Do It Like A Dude," and more recently, Jessie has been known for her TV appearances on shows such as The Voice Kids UK, and Channel 4's Celebrity Gogglebox. However, in late 2018 the "Price Tag" singer hit the headlines for different reasons, when it emerged that Jessie J was dating Hollywood heartthrob, Channing Tatum. But what are the origins of this A-List relationship? Here are all the juicy details you need to know.

According to Cosmopolitan, rumours of the pair's relationship first began to emerge in October 2018, when an unsuspecting member of the public spotted the celebrity duo enjoying a game of mini golf. The following month, Jessie added fuel to the rumour-mill fire when she attended the opening night of Magic Mike Live in London, and congratulated Tatum in a series of Instagram stories. According to Capital FM, back in March 2019 both Jessie and Channing were seen in public together for the very first time — and later that month, reports emerged that the couple were already discussing the possibility of marriage.

Speaking to New! magazine, one source revealed, "Jessie and Channing’s relationship has been going from strength to strength lately, which has really taken their friends by surprise. In fact, things have got so serious they’ve even discussed getting hitched, which isn’t too surprising when you consider that Channing is a really mature guy who knows exactly what he wants." Speaking about the celebrity pair, the source went on to add, "he’s been married before so it’s not a scary topic for him and he’s certainly not afraid of commitment, while Jessie has been desperate to find The One for some time now after a few failed relationships, and she thinks Channing could be him. She’s pinching herself she’s so happy."

However, as reported by the Metro, Jessie recently nipped any rumours of marriage in the bud. During an interview with Jamie Theakston and Amanda Holden on the Heart Breakfast radio show, the singer said, "No just because he’s Channing Tatum everyone’s kind of sped us up in to this like, 'are you getting married? Are you doing this?' I mean I’ve been in relationships for a lot longer than Chan and I have in the last four, five years but they’re not famous so no one really cares. We’re having a lovely time."

As mentioned previously, Jessie is currently appearing in Channel 4's newest spin-off series Celebrity Gogglebox, where she provides her own unique commentary of some of the biggest shows on telly. According to iNews, the "Bang Bang" singer stars on the show alongside the likes of X Factor winners Little Mix, Radio DJ Nick Grimshaw, TV presenter Rylan Clark-Neal, Strictly Come Dancing's Oti Mabuse, acting legend Sheila Hancock, and many more.

Celebrity Gogglebox currently airs every Friday at 9 p.m. on Channel 4, and you can catch up with the celeb spin-off series on All 4.

More like this
At 28, Emma Thompson Was Already A Star — But Unhappy In Love, Actually
By Olivia-Anne Cleary
Kate Bush Reacts To “Mad” Revival Following 'Stranger Things' Cameo
By Sam Ramsden
Britney Has Been Granted A Restraining Order Against Her Ex-Husband
By Bustle Staff
Perrie Edwards & Alex Oxlade-Chamberlain Have The Sweetest Engagement Pictures
By Lara Williams and Frances Stewart
Get The Very Best Of Bustle/UK