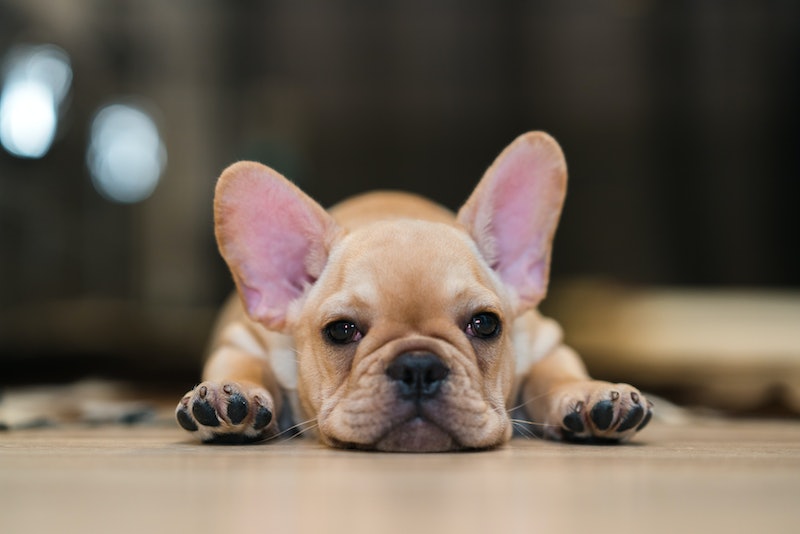 In some good news for the day, two Jet Blue flight attendants saved a French bulldog (named Darcy!) who was having trouble breathing on a flight, and the internet is collectively heaving a huge sigh of relief. The three-year-old pup was flying with her owner, Michele Burt, from Orlando, Florida, to Massachusetts when Burt noticed that her dog was showing signs of distress, Travel & Leisure reports. When Darcy started panting heavily, Burt took her out of her carrier and placed her on her lap to calm down, but when the pup’s gums and tongue started turning blue, Burt could see that Darcy didn't have enough oxygen.

According to Travel & Leisure, Renaud Fenster, one of the flight attendants, told Good Morning America that “As a French bulldog owner myself, I knew the dog was overheating and needed some ice.” When ice packs and fresh water didn’t relieve Darcy’s distress, Fenster called the captain to inform him that he wanted to use some oxygen to help the struggling pup, which the captain agreed to. Fenster and fellow flight attendant, Diane Asher, then assisted Darcy with an oxygen tank and small breathing mask, and quickly revived the struggling pup — “After Darcy breathed through the mask for a few minutes, she became alert and returned to normal,” Travel & Leisure further reports. Burt told ABC that “I placed the mask on her face and [...] she became alert and after a short time she didn’t want the mask. I believe Renaud and Diane saved a life. Some may reduce the value of a life because Darcy is a canine, I do not.”

Today notes that the two flight attendants helped intervene in what could have been the tragic loss of Darcy’s life. Thankfully, Darcy is safe and made a fully recovery post-flight. Burt remarked that, when flying, “We are all affected by cabin pressure and oxygen fluctuations, human, canine and feline, etc., but the fact that the attendants were responsive and attentive to the situation may have saved Darcy’s life.”

In an ever-so-moving Facebook post, Burt also wrote that “It may have been only a ‘dog’ to some, not a major disaster certainly, but a family member to us.” Burt went on to say that “Goodness and kindness along with the ability to assess a medical crisis, albeit a canine in crisis, saved the day.” And in a timely and much needed reminder to all of us, Burt told ABC “that good people are doing good things on a daily basis even if it’s in small ways or big ways.”

JetBlue issued a statement to ABC News in response to Burt’s Facebook post saying that “We all want to make sure everyone has a safe and comfortable flight, including those with four legs — we’re thankful for our crew’s quick thinking and glad everyone involved was breathing easier when the plane landed in Worcester,” Massachusetts.

Travel & Leisure notes that many short-nosed breed dogs, like French bulldogs, are vulnerable to respiratory issues, and families should be careful when flying with them. Some airlines don’t even allow these breeds on flights as they may struggle with breathing problems during air travel. Recently, a number of airlines recently updated their regulations on what animals can fly in-cabin, following a few high-profile incidents where animals were not able to be safely transported.

Fortunately, for Darcy and her family, thanks to the amazing efforts of two JetBlue flight attendants, the pupper is doing well and thriving post-flight. And in this era's endless barrage of less-than-stellar news, that’s something we can all feel thankful for.