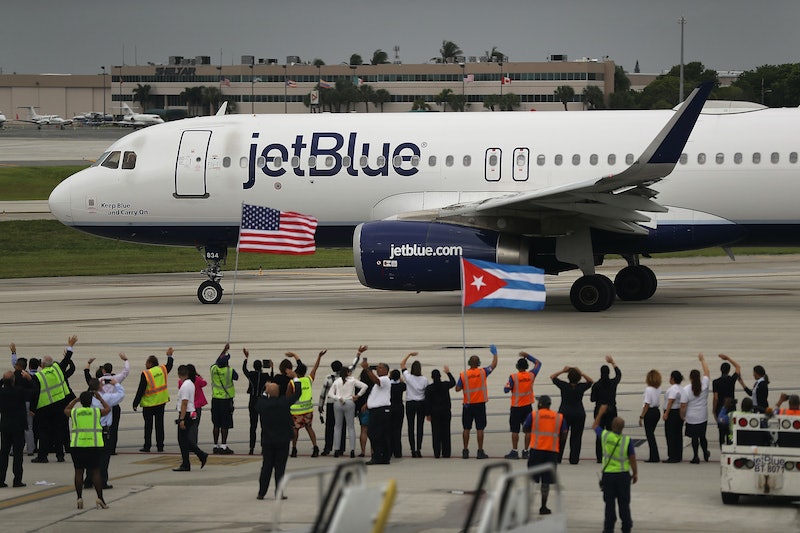 It's no secret that airline fares have been steadily increasing in the last few years. Not only have ticket prices themselves gone up, but so have all of the extras that often accompany flying, especially lengthy or international flights. In most cases, customers have to pay extra money to do things as simple as check one bag, pick a seat before check-in, get a snack, and in some cases, even bring along a carry-on bag. Unfortunately, the trend doesn't seem like it's going to stop any time soon. Earlier this month, major airlines warned that fares were going to increase even more as fuel prices rise. So whenever a really great flight deal is going on, it's pretty much imperative to share it with anyone who will listen. Luckily, airlines hold these kinds of sales a few times a year, and while they almost always include black-out dates and restrictions, they are still worth it. For instance, JetBlue's one-way flash sale is offering some really great travel deals, and you don't want to miss out.

When I say "really great," I'm not exaggerating — a whole bunch of the flights are as low as $20! When have you ever seen a flight that inexpensive?! You might assume that these are only flights to very random places that people hardly ever travel to, but they actually aren't. Major cities like New York and Washington, DC are included on this list of deals, and routes like Portland to NYC are included.

There's also one more catch: these deals are for very specific locations, both departures and arrivals, and very specific dates and times. This isn't one of those deals where you can buy a ticket to, say, Charleston, South Carolina within the next three months. Instead, you're buying a ticket for a specific flight. If you're looking to travel somewhere specific and you're willing to be flexible about dates and times in order to save some money, then this is definitely worth taking advantage of.

Even better? Some of these flights are on or around the Fourth of July holiday, which is one of the most expensive holidays to fly during.

The lowest deals come in at $20 and include:

The rest of the flights are anywhere from $40 to $80. Some of the most notable options include a flight from Fort Lauderdale, FL to Cancun, Mexico for $80; Fort Lauderdale, FL to Nassau, Bahamas for $50; and San Juan, Puerto Rico to St. Thomas, US Virgin Islands for $30. For the full list of what's being offered, you can check out the site. Offer is dependent on availability.

If one of these seems interesting to you, you don't want to wait very long — these are sure to go quickly. And, yes, sure, these are mainly for super early flights, but honestly? Saving a few hundred dollars is worth waking up at the crack of dawn for. Plus, you can always sleep on the plane!