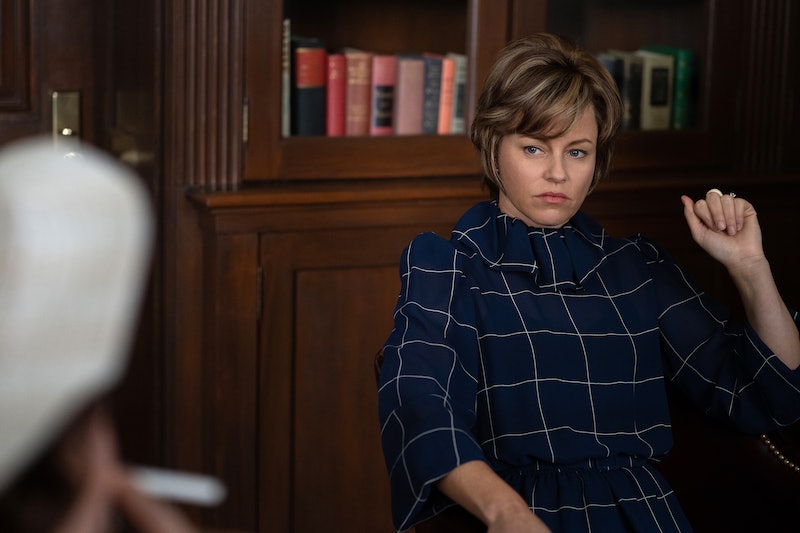 The most recent episode of Mrs. America is named for Jill Ruckelshaus, the pro-choice Republican proponent of the Equal Rights Amendment, played by Elizabeth Banks. In it, she fights to keep the ERA in the GOP platform at the 1976 Republican National Convention, but it's implied that the advocacy cost her husband the vice presidential slot on Gerald Ford’s ticket. Ruckelshaus is portrayed as a free thinker, too fiscally conservative to be at home in the offices of Ms. magazine, but too feminist to have a drink with Phyllis Schlafly. Their on-screen attempt at finding a middle ground ends explosively when Schlafly suggests the secretaries alleging sexual harassment on Capitol Hill are "really just inviting it."

If Schlafly represents an evangelical conservatism come from the outer flanks of the Republican party, Jill Ruckelshaus is Mrs. America's moderate establishment avatar. In real life, she was a White House aide to President Nixon, leading his Office of Women’s Programs for over a year until resigning in 1974. After Nixon’s own resignation, she was appointed to a new position in Ford’s administration: chair of the National Commission on the Observance of International Women's Year. It was Ford’s hope that her commission would help push the ERA through the final phases of its increasingly contentious ratification.

Every few episodes of Mrs. America, Schlafly is forced into a head-to-head confrontation with one of her pro-ERA foes. But what sets her collegial scuffle with Ruckelshaus apart is that the women share so many superficial similarities. Both were pristinely coiffed, conservative Midwesterners with political ambitions as well as husbands and children. As Ruckelshaus told C-SPAN in 2005, “I don't mind being called a homemaker," though it's not how she's most often identified. A 1975 New York Times story went with "leading Republican feminist"; a Washington Post profile reveals she was called "the Gloria Steinem of the Republican Party."

Ultimately, of course, Schlafly’s Eagle Forum was successful in defeating Steinem and Ruckelshaus and the ERA. Still, Ruckelshaus, who went on to serve on the U.S. Commission on Civil Rights in the early '80s and the boards of companies like Costco and the Lincoln National Financial Group, remembers her Ford appointment as one her “favorite” jobs. “I really, really enjoyed being the head of the U.S. International Women's Year commission that worked out of the State Department in 1976 and '77,” she told C-SPAN. “And we submitted a report to the president. But we had hearings all over the country, and I just learned a lot.”