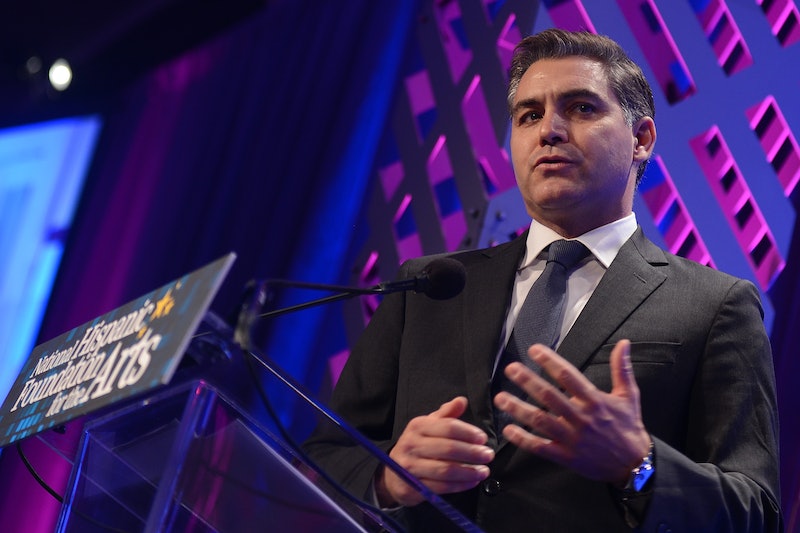 CNN reporter Jim Acosta doesn’t care if you think he’s a little fiery. Acosta told Stephen Colbert he'll keep pushing back against the president if it means defending the truth during an interview for The Late Show with Stephen Colbert on Wednesday night.

The chief White House correspondent for CNN told Colbert about how he’s determined to keep pushing back against any falsehood and those who spread them. He said sees it as his duty to fact-check statements from America’s power players in real time, and he doesn’t take that job lightly.

President Donald Trump has notoriously has targeted CNN and called them “#FraudNewsCNN in tweets, as The Washington Post has reported. Suffice it to say, the Trump administration and Acosta don’t have the warmest relationship. Just last week, For instance, Acosta tried to get White House Press Secretary Sarah Huckabee Sanders to shy away from the President Trump's move to dub the media “the enemy of the people," The Daily Beast reported. Acosta spoke with Colbert about that moment and why he’ll keep fighting against falsehood.

“Listen, these are tough times,” Acosta told Colbert. “There are some tough questions to be asked. But I don’t think we do ourselves any good, Stephen, if we shy away from these hard questions. And you know, my goodness, and the way I look at it is, and this is the debate I have with my fellow journalists — we talk about this — is: What if we just did nothing? Do we just sit back and do nothing?"

Colbert’s show is one of comedy, so there was some typical light-hearted banter about Acosta’s socks. He wore a red, white, and blue pair, which he jokingly told Colbert came “from the enemy of the people collection.” However, the rest of the interview’s tone was considerably serious.

Acosta spoke about how fact-checking the president could be a daunting task, which occasionally took him from reporting the news to being the news — which is never the goal for a seasoned journalist. But Acosta said he will keep asking the hard questions, even if the president and some of the country don’t want to hear them.

If you think that you can distort the sense of reality we all have on a daily basis by telling lie after lie and falsehood after falsehood and not face any hard questions, then I think that you’re just not living in the same United States of America that I am.

“I thought you were going to say: ‘Then you might be Donald Trump,’” Colbert retorted.

Acosta also addressed how the president’s constant clobbering of the media — CNN in particular — has affected his relationship with the public. He noted that when he actually gets to talking with people, they usually don’t take such an adversarial tone. That said, people often come to him with preconceived notions.

“We push back on these falsehoods on a daily basis and this is why there are a lot of folks who support the president who are very upset with us right now," Acosta told Colbert. "Because they take that in and they see it as: We’re just bashing the president all day long. I mean, listen, are we supposed to do the news and not fact-check the president when he is obviously just telling whoppers one after another?”

As he spoke with Colbert, Acosta talked a lot about questions and answers. Although it’s usually him who asks the hard questions, he also spoke about questions he gets from the public in the era of Trump. He told Colbert the number one query is: Why don’t you report the good things the president does? Acosta noted CNN’s coverage of positive job numbers. Another common question Acosta gets is: Do you like the president?

Acosta made his points, and seemed to want to deliver this message: CNN and outlets like it will continue to do their jobs and seek the truth — no matter their reputation.