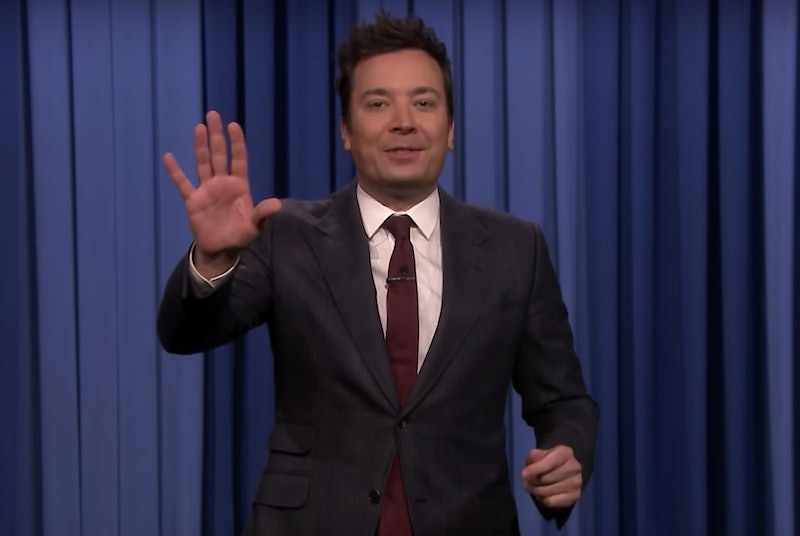 President Donald Trump announced over the weekend that his chief of staff will leave the White House by the end of the year, and recent reports indicate that he's having a hard time finding a replacement. Naturally, Jimmy Fallon mocked John Kelly's departure on The Tonight Show, joking that the retired Marine Corps general was so happy to leave that he immediately morphed into Full House actor John Stamos.

"If anyone here wants to be President Trump’s chief of staff, just raise your hand and the job is yours," Fallon told his audience on Monday.

Trump's reported top pick to replace Kelly was Vice President Mike Pence's current chief of staff, Nick Ayers. He quickly made it clear that he didn't want the job, however, as a White House official told CNN that Ayers wouldn't commit to serving immediately under Trump for two years. In fact, he resigned from his position in Pence's office over the weekend and plans to leave at the end of the year, just like Kelly. Bustle has reached out to the White House about Ayers and Trump's plan.

"You know you’re a tough guy to work for when someone says, 'Sorry, but I’d rather be stuck in a room all day with Mike Pence,'" Fallon quipped about Trump.

Without Ayers on deck, it's unclear who will replace Kelly at the beginning of 2019, and Fallon quipped that the president was asking everyone he came in contact with to take the job.

The comedian also joked that since the administration is searching for someone to "bring order to the White House and improve Trump's behavior," their first choice was clearly Mary Poppins.

Trump, on the other hand, has refuted claims that no one wants the job. He tweeted Monday morning that "over ten" people are vying to replace Kelly. "Why wouldn't someone want one of the truly great and meaningful jobs in Washington," he asked.

Yet the Associated Press reports that the president is "scrambling" to fill the position. He apparently has a list of at least four potential candidates that includes Office of Management and Budget Director Mick Mulvaney, Rep. Mark Meadows (R-N.C.), former New Jersey Gov. Chris Christie, and the chairman of the conservative House Freedom Caucus, according to the AP.

Meadows told Fox News that he's flattered to be considered. "I’m looking forward to having conversations with the president, if he so chooses,” he said. “I’ve had a lot of colleagues suggest I should do this. But I don’t know about private conversations.”

Christie is often floated as a potential hire by the Trump administration, but so far hasn't actually been offered a job. He hasn't publicly commented on whether or not he would be interested in serving as White House chief of staff. The president has to find someone for the job, though, and he doesn't have much time before the year is up.